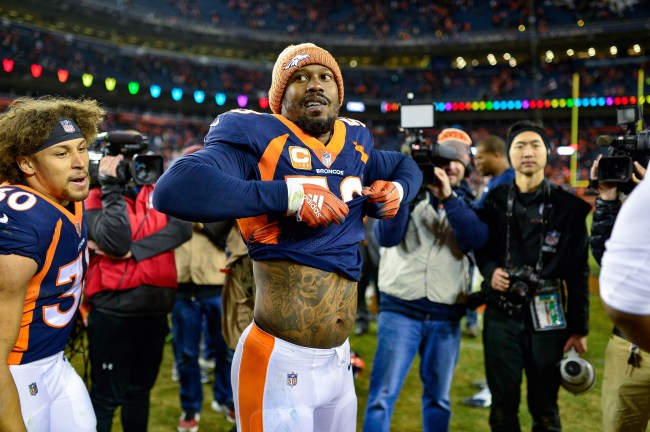 Von Miller of the Denver Broncos is a freak of nature. After being taken No. 2 overall in the 2011 NFL Draft out of Texas A&M, all the guy has done is total 98 career sacks, earn First-Team All-Pro three times and go to the Pro Bowl in every season but one. To say he’s a difference maker on the team’s defense is an understatement, as he’s the one guy every offensive coordinator game plans for before facing the Broncos.

While Miller’s had tremendous success in Denver, he’ll be 30 years old by the time next season kicks off, meaning he’s got some tread on his tires. Still, given the fact he just completed a regular season with 14.5 sacks and four forced fumbles, even a 30-year-old Von Miller at 90 percent would be better than the majority of other defenders in the league.

Still, given the fact that he’s getting up there in age, and the Broncos are looking to improve, the team’s president, John Elway, said that he would explore the options of trading Von Miller.

“I think we’re going to visit all that. I think we have to look at all the possibilities and get an evaluation of that.” pic.twitter.com/SEUDuV5TGZ

That would be a shock to everyone in the city and for every Bronco fan anywhere else, to say the least. And one person the idea didn’t sit well with? Von Miller’s mom.

Take a look at what Mrs. Miller posted on Instagram this afternoon, which tore apart Elway, blaming him for the team’s struggles after spending so much money on a number of failed quarterbacks over the years.

“The problem is Elway” pic.twitter.com/UZGdNqVfCd

Von Miller’s mom went full soccer mom here — or, in this case, football mom — and I absolutely love it. Unfortunately, her Instagram account’s private, but, thankfully, someone took a screengrab of her social media rant for the Internet to see in all its glory.

Who knows if this helps or hurts Von Miller’s chances of staying with the Denver Broncos next season, but, if this is how the entire Miller household feels about John Elway, then, damn, there’s going to have to be some sort of make up session before next season starts.