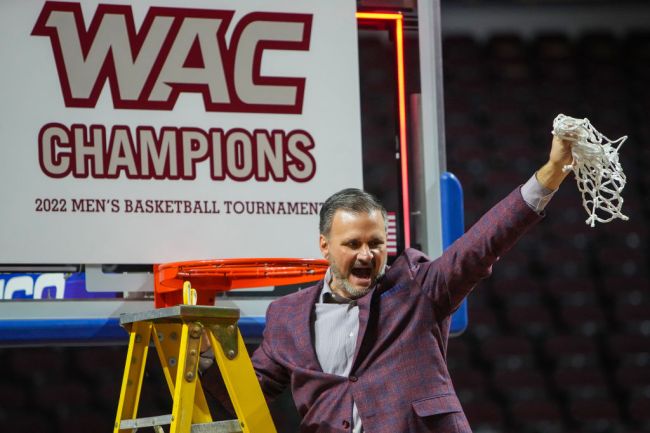 There are few weeks in the world of sports that are as exciting as college basketball’s “Champ Week”. It’s the culmination of a year’s work with teams’ entire seasons on the line.

They plan to change the way that they seed their teams for their conference’s end-of-season basketball tournaments so that those teams are seeded based on analytics instead of record. The WAC’s commissioner and associate commissioner discussed the change with CBS Sports today.

Scoop—@WACSports is doing the unprecedented: Its basketball tournaments' standings/seedings will be determined not by league record, but by a KenPom-created formula that utilizes the NET and will reward teams wins and losses. A college sports first. Story: https://t.co/pryiZDhPf4

According to the WAC commissioner, their goal is to protect the teams with the best resume.

“The goal (is) ultimately to protect the highest résumé with the highest seeds. As we were coming up with this strategic plan from a basketball standpoint — which was one of my big tasks when I came here — nonconference scheduling always came up. … And ultimately, it becomes very hard to penalize people for what you’re able to do from a nonconference scheduling standpoint.”

According to the WAC’s associate commissioner, it was a way to utilize the NET system to reward teams for playing tougher schedules.

“Essentially, what we came up with was a way to utilize the NET in order to provide the reward/penalties for a particular game. It’s weighted depending on where the game is at, just as the committee would look at it, and so it’s a system where, essentially, we’re trying to promote Quad 1, Quad 2 games. And so when you look at it, not every game is worth the same inside Quad 1, Quad 2, just as the committee would look at that. Obviously, a top-10 win is not the same as a top-30 win. Similar, but not the same.”

The big issue with this decision is that it makes conference play pretty inconsequential. The WAC’s teams, other than New Mexico State’s men’s basketball team, don’t tend to rate very highly in the NET.

That means that a team could just need a few good wins in non-conference play to secure themselves one of the top seeds in the WAC tournament.

It’s difficult to understand why a conference that struggles for relevance in college basketball would make a move to give their own conference’s games less significance.

Let’s just hope nobody follows in their footsteps and every other conference understands that the right move is to allow their players to have control of their own destinies heading into the conference tournament.