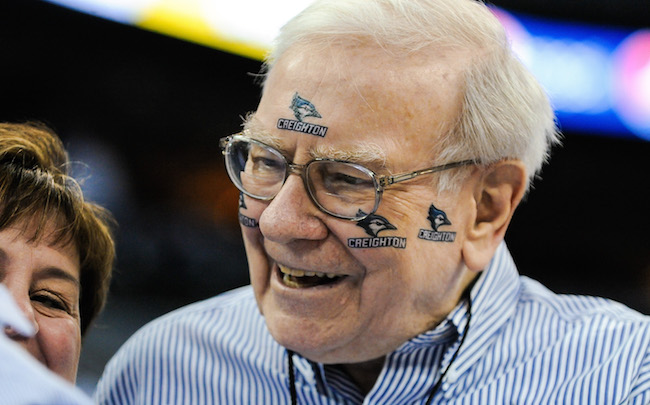 Every year, Americans collectively cost the economy billions of dollars by hiding streams of NCAA Tournament games behind spreadsheets and posting up in a bathroom stall with their phone for 20 minutes to get a hit of that sweet, sweet madness. However, not all employers look down on the nation’s temporarily rabid interest in college basketball— as well as the technically illegal bracket competitions that come along with it.

For the past few years, Warren Buffett has celebrated the arrival of March Madness by putting a small portion of the ungodly amount of money he’s made over the course of his life on the line in a series of bracket challenges. He teamed up with Cleveland Cavaliers owner Dan Gilbert in 2014 to offer $1 billion to anyone who could overcome the one in 1.92 quintillion odds and fill out a perfect bracket, and last year he offered Berkshire Hathaway employees the chance to take home a slightly more modest $1 million if they could correctly pick the results of every first-round game (which is tough to do considering the more than 1.4 million possible outcomes).

According to CNBC, Buffett is back at it again this year with a brand new challenge that will results in anyone who can perfectly predict the lineup of this year’s Sweet 16 making $1 million a year for the rest of their life. Optimistic employees might want to have Creighton and Nebraska (Buffett’s alma mater) winning their first couple of games, as the CEO has promised to double the prize to $2 million if either squad wins the tournament.

Per FiveThirtyEight, the odds of even the most informed college basketball fan nailing the eventual Sweet 16 are in the low millions, so the chance that Buffett will have to part with an almost incalculably low percentage of his net worth doesn’t seem too high.