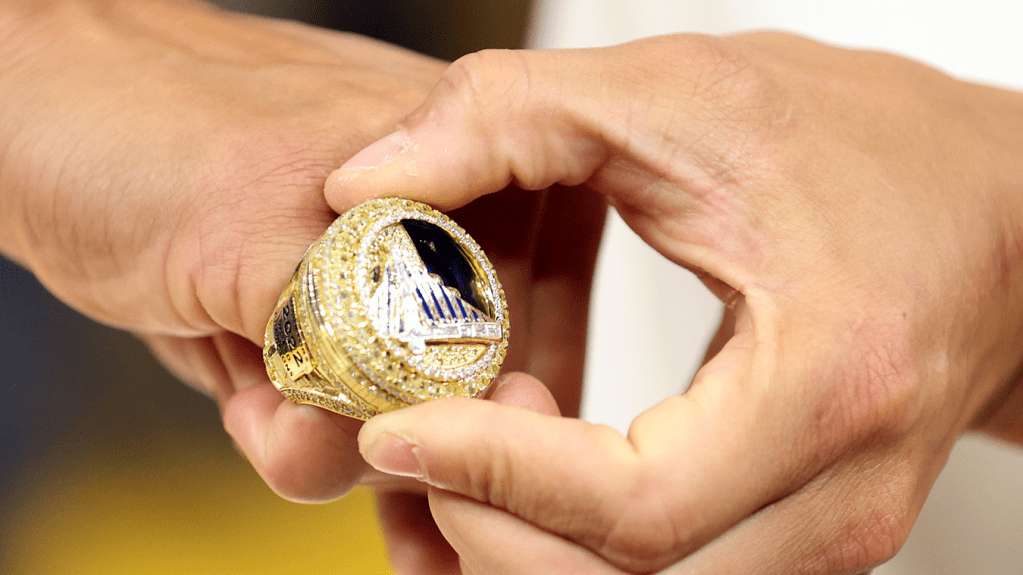 SAN FRANCISCO, CALIFORNIA: Stephen Curry #30 of the Golden State Warriors inspects his championship ring during a ceremony prior to the game against the Los Angeles Lakers at Chase Center on October 18, 2022 in San Francisco, California. Photo by Ezra Shaw/Getty Images

The Golden State Warriors just debuted their 4th Championship Rings in 8 years. It’s clear they have established themselves as the biggest dynasty across the 4 major sports in the United States right now.

When a team is pumping to that many models of championship rings in such a short period of time it’s reasonable to assume that they’d struggle with innovation. This is, in fact, an incredible problem to have if you’re a pro sports team like the Warriors. But it isn’t a problem Golden State seems to actually be struggling with because their latest Championship Rings are nothing short of perfection.

Golden State debuted their 2021-22 rings ahead of their season opener against LeBron James and the Los Angeles Lakers. It had to be extra sweet for the Warriors players to see LeBron watch as several of them received their 4th ring. And the rings are LOADED with diamonds and special details.

Here are some photographs and videos of the new Golden State rings along with a rundown of the specs below:

How many diamonds are in the Warriors’ newest rings?

I’m glad you asked. An official release from NBA.com breaks down what makes these championship rings so special:

The rings feature approximately 16 carats of yellow and white diamonds set into yellow gold to represent the team’s 16 wins during the 2022 NBA playoffs, marking the first time a championship ring has been made up primarily of yellow diamonds. Seven carats of yellow cushion cut diamonds on the bezel represent the team’s seven championships, while 43 baguettes in the bridge represent Stephen Curry’s 43-point performance in Game 4 of the NBA Finals.

A secret compartment on the top of the ring unveils the trophies won by each individual player, which is only accessible through a lever designed within the architectural features of Chase Center, the Warriors’ home arena, depicted on the side of the ring. Additional features on the sides of the ring include seven championship trophies to represent the franchise’s seven NBA championships, the team’s “Just Us” mantra, and more.

To recap, that’s 16 carats of yellow and white diamonds, but primarily yellow. There are 7 more carats of yellow cushion cut diamond. And 43 baguettes in the fridge. And these championship rings are yellow gold which just plays perfectly with the NBA trophy, Golden State’s colors, and the whole motif.

What happened after the team got their championship rings?

I’m glad you asked… The Golden State Warriors proceeded to blow LeBron James and the Los Angeles Lakers out on the NBA’s season tip-off. Golden State beat the Lakers 123-109 thanks in part to a 33-point performance from Stephen Curry, 20 points from Andrew Wiggins, and 18 points from Klay Thompson.

LeBron James gave it the ol’ college try and put up 31 points against the Warriors. Anthony Davis added 27 points and Russell Westbrook had 19. But they still got blown out to start the season 0-1 again.