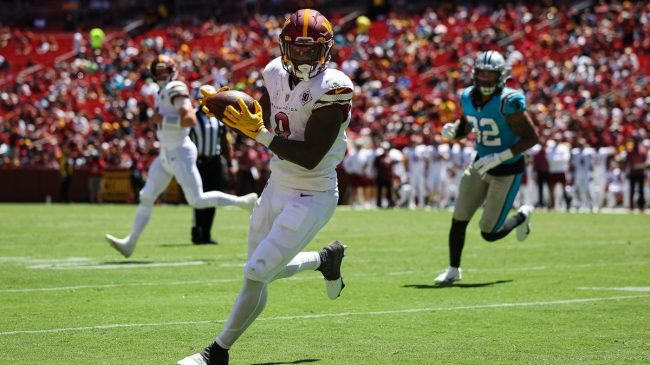 In case you needed reminding, professional athletes are not cut from the same cloth as the rest of us human beings. In fact, the gap in ability from the best top-level pros to the worst top-level pros is infinitely smaller than the gap between the worst player and the average joe.

Robinson was the starting running back for Alabama Crimson Tide in 2021. The Commanders then selected him with the 98th pick in the 2022 NFL Draft.

But Robinson didn’t even make it to the first week of the season before tragedy struck.

The young running back was involved in a scary incident when he was shot during a carjacking in the NFL preseason. Robinson suffered non-life-threatening injuries. But nobody could’ve imagined how quickly he’d bounce back.

He was back in the Commanders’ facility within days and returned to practice just two weeks later. Slowly but surely, Robinson has worked his way closer and closer to returning to the field and making his NFL debut.

Now it appears that moment is not far away.

While Robinson returned to the practice field weeks ago, he had not been taking part in full-team practices. That is, until this week.

CBS Sports’ Brian DeArdo reports that Robinson was officially designated for return to practice on Wednesday. DeArdo also reports that Washington expects him to be available for its Week 5 game against the Tennessee Titans.

Washington currently sits at 1-3 and much of its struggles are due to the offensive side of the ball. The Commanders rank 26th in the league in points per game (18.3) and 21st in rush yards per game (100.5). So a healthy Robinson could be huge addition to a team that very badly needs a spark.