REPORT: Washington Looking To Trade Dwayne Haskins By End Of The Month – Won’t Be On Sideline Today 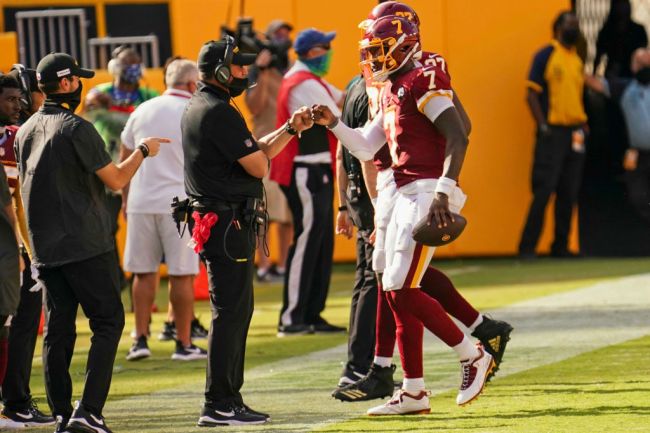 Dwayne Haskins’s time in a Washington Football Team uniform is coming to an end.

After being benched this week due to lack of work ethic and poor habits, and relegated to third-string behind Kyle Allen and Alex Smith, Dwayne Haskins is on the trading blow.

Earlier in the week, head coach Ron Rivera said “the team has not given up on Haskins”, a first-round pick in the 2019 draft.

Jason La Canfora is reporting that the team, is indeed, giving up on Haskins.

The situation between the quarterback, who was drafted 15th overall just 16 months ago, and Rivera’s staff is already fairly toxic, and multiple sources within the organization believe a trade by the end of the month is the most likely outcome.

Some rival executives have already begun looking at film of the former Ohio State star, anticipating him being moved in the coming weeks, with Kyle Allen — who has deep ties to this coaching staff — taking over as starter, veteran Alex Smith now the No. 2 quarterback and Haskins demoted all the way to third string.

Several sources close to Haskins have advised him that a trade would be far and away the best outcome possible, ideally to a solid franchise with an experienced veteran QB the 23-year-old could learn from.

Insiders stated that Haskins was never a good fit for the organization and only drafted by the team because of his connection to the Snyder family.

Numerous sources who have been in contact with Washington staff members told me that there was a strong perception that Haskins was not a good fit early on, and that he was only a starter because he was a favorite of owner Daniel Snyder, whose children went to school with Haskins.

Unfortunately for Haskins, Allen is the chosen one for Rivera and his staff.

“What they’ll tell you in that building is that he is a project who was drafted by the owner and his son,” said one league source who has talked to numerous Washington staff members. “That’s the bottom line there. Allen is their guy. They think he fits their system. They didn’t really want anything to do with Haskins from the beginning.”

According to multiple reports, Haskins won’t be at the game today because of a stomach virus and the team told him not to come in.