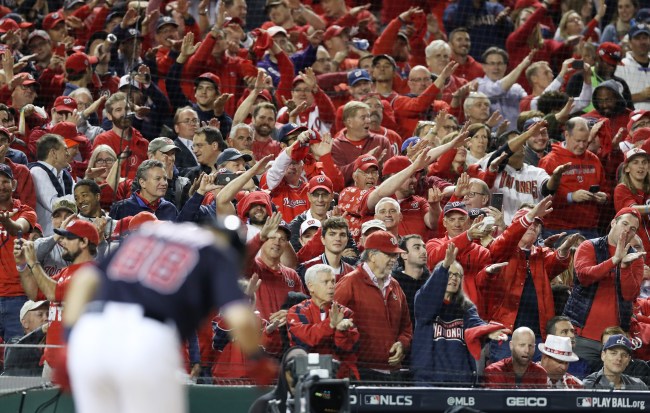 The Washington Nationals swept the St. Louis Cardinals in the 2019 NLCS and the team’s now headed to the first World Series in franchise history, which leaves the Seattle Mariners as the only MLB team that’s never appeared in a World Series.

There are plenty of theories on how the Washington Nationals turned their season around in June and went on a hot streak that’s led them to this point. Some people point to the departure of Bryce Harper to the Phillies, it’s his birthday today by the way. Others point to the dominant year of Stephen Strasburg and that Nats’ offense.

But it’s the team itself that credits the viral ‘Baby Shark‘ song, at least partially, with their turnaround in June and momentum up to their first-ever World Series.

It began in June when Nationals outfielder Gerardo Parra changed his walk-up song to ‘Baby Shark’ as a favor to his kids. He recorded two hits that day and the team was energized. In the second half of the MLB season, the Nationals were 46-27.

Fans got on board with ‘Baby Shark’, as did his teammates, and that’s been the catalyst leading to their success:

The fans jump to their feet, sing along, and make chomping motions with their hands. The workers in the team store stop selling, at least for a moment, and start chomping.

The “Parra Shark” T-shirts soon followed, and the Nationals used the Parra cartoon — and Parra himself — for a “Baby Shark” video. When one of the Nationals gets a hit, the players can do the chomp, and not only when Parra is the one with the hit.

“We normally save it for when Parra gets a hit, and we do the Baby Shark along with the crowd,” Nationals pitcher Sean Doolittle said. “But a lot of times, late in games, you might see the shark. You never know.” (via LA Times)

The Nationals had a ‘bring your dog to the ballpark’ day and fans were dressing up their dogs as baby sharks. The pitchers are on board with the celebration. It’s a legitimate phenomenon.

Baby Sharks’ in the dugout:

put it in the louvre pic.twitter.com/5CnFBaA1AM

These are the proud parent moments that melt your heart … 🥺 pic.twitter.com/gSNDlV6PBA

The whole park was doing the ‘Baby Shark’ dance not too long ago:

It’s only going to get A LOT more intense with the World Series just a few days away. Here’s Gerarod Parra talking about changing the culture with the Baby Shark song last night:

The song will never die and I don’t get the obsession. It’s catchy but not on the level people think it is. I have a 6-month old baby boy and friends/family repeatedly ask “does he LOVE the Baby Shark song?” and then demand we play it for my child. He smiles, they think it’s amazing, not realizing that he’s the happiest child ever born and literally shakes his entire body with laughter just making silly faces in the mirror. It’s not the song.

There are worse celebrations in sports. I’d much rather deal with this than my own Tampa Bay Rays fans clanging a damn cowbell next to my eardrums. That gets old after about 5 seconds. And the New York Mets with ‘the wave’ might be the worst. Let The Wave die forever already.