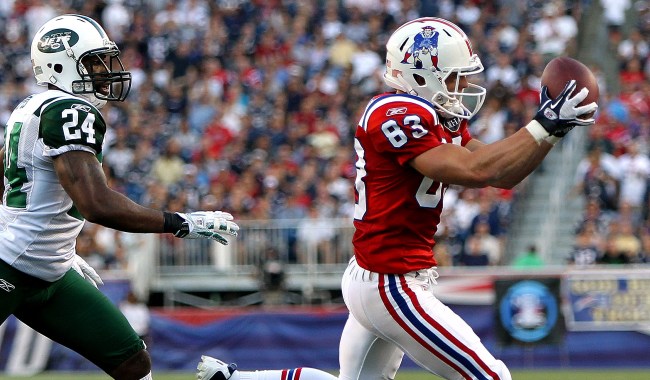 Welker, now 38 and the wide receivers coach for the San Fransisco 49ers, led the NFL in receptions in three of the six years he played in New England under head coach Bill Belichick and became the first player in NFL history to have five 100 reception seasons, all with the Patriots.

However, during his six seasons in New England, Welker never won a Super Bowl – the Patriots lost twice, both times to the Giants in Super Bowl XLII and Super Bowl XLVI, and based on this week’s interview, didn’t seem to trylu enjoy his time playing under coach Belichick.

When asked about his relationship with Belichick while in New England and about how The Hoodie’s treatment of star players grated on some inside the locker room, Welker replied, “The way he goes about it there are no superstars. Everybody has their role on that team. Everybody is going to get called out. There’s no preferential treatment and a lot of time he calls out the star players a lot of times just to set the tone with the whole team. Where, everybody, ‘Okay, he’s talking to Tom like that, well obviously he can talk to me like that.’ And Tom has such a great way about him of being able to kind of take it even though it makes him mad and everything like that. He takes it and he just keeps on going to work and improving and working on his craft and everything else and everybody else just has to fall in line.”

Welker was then asked if it felt like a weight was lifted when he left New England and Belichick and he didn’t deny it, saying, “Maybe a little bit. I was still upset about it. I did want to be there, but there was part of me that, I just like enjoying the game. I enjoy having fun, all those things. Coaching now, you learn a lot from the tactics and different things like that, but at the same time putting your own twist on it and understanding… I tell my guys all the time, ‘As long as we’re giving great effort and we’re on top of our assignments we’re going to be good. Once it’s not where we need to be, that is when we have problems.’

“Kind of being there and there’s a big mental aspect to the game of just being prepared, being this, being that, all those different things, but also enjoying yourself and having fun playing the game. I feel like you’re playing your best ball when you’re having fun and enjoying themselves. I think there were some times where I didn’t really feel that at times for different reasons, the guys that we had in the locker room, the camaraderie that we had was better some years than others and all these different things and when you’re one of the more highly paid players on the team you’re expected to deliver like a highly paid player. There’s definitely pressure on that, there’s definitely all these different things… is tough and it’s hard. And Coach Belichick is hard on guys, trying to get the most out of him that he can.”

Based on what Welker says, and now that Tom Brady has taken his talents to Tampa, it certainly will be very interesting to see if Belichick’s approach to how he treats his players will still work without the buffer Brady provided for the past 20 years.

Listen to Welker’s entire segment below…