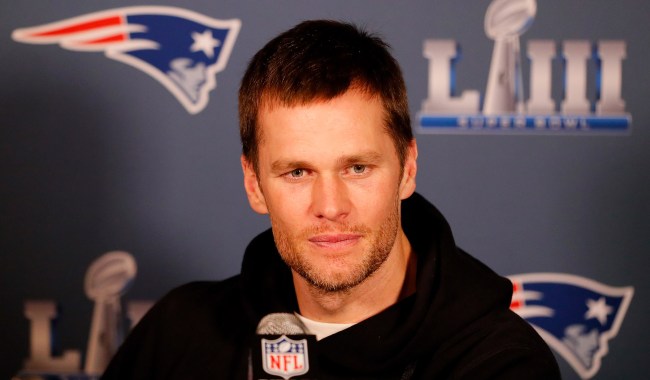 So far what we have mostly heard about Tom Brady from Atlanta, the site of Super Bowl LII, are all the incredible historical marks the QB has and/or will set in the postseason.

I don’t care about any of that. Screw all the rah-rah crap. I want some real stories. Tell me about some of the off-the-field stuff. There are a billion media members in Atlanta. Surely, someone can dig up something. Bro simply can’t be so squeaky clean.

Sigh… probably not going to happen. But this story about Brady and Wes Welker slamming beers on a night out at the bar, shared by his ex-Patriots teammate and current Impact Wrestling star Quinn “Moose” Ojinnaka, is pretty solid.

According to Ojinnaka, one night in 2010 after a road game in Buffalo the team got stranded there due to a snowstorm, so Brady and crew decided to go to a bar. It was then and there that “Moose” determined TB12 was the real GOAT.

“I realized then that Tom Brady was the greatest quarterback ever, because him and Wes Welker got in a beer-chugging contest and as good as he is being the quarterback, he’s even better chugging beer!” Ojinnaka told TMZ. “That’s the best night out I’ve had as a football player.”

He ain’t lying. Remember about a year ago when Brady was a guest on The Late Show With Stephen Colbert and Stephen challenged him to chug a beer?

Heck, tales of Brady’s beer-chugging prowess was even making news four years ago. Former offensive lineman Ross Tucker said Brady’s been slamming beers like a pro ever since his rookie season.

I was surprised to see Brady take part. The rookies looked at the seemingly pretty boy quarterback and laughed. I think I snickered myself.

The Rams have really no chance on Sunday. They do know that, right?