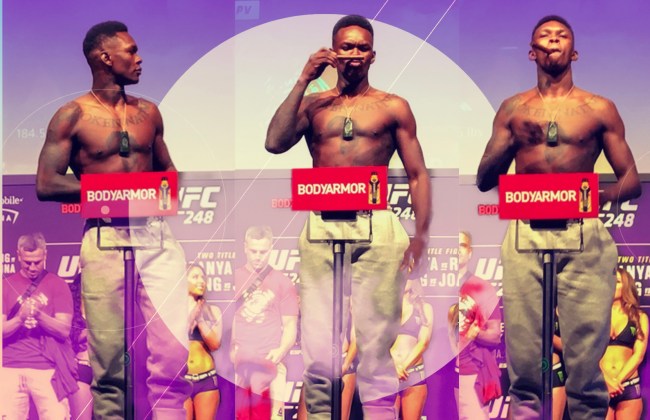 Because one world title fight is never quite enough …

The UFC is heading back to Fight Island and the middleweight title is up for grabs this Saturday, September 26, when champion Israel “Stylebender” Adesanya puts his belt on the line against rival Paulo “The Eraser” Costa at UFC 253 (7 p.m. PST . 10 p.m. EST). It’s a primetime matchup between two undefeated knockout artists, pitting Adesanya’s style and finesse against Costa’s power and force, made even better given that these two really, really don’t like each other.

Adesanya vs. Costa really is a big-time fight, and even though they may not be household names yet, both “Stylebender” and “The Eraser” have all the goods to deliver a classic. Of course the grudge match aspect makes this fight even tastier.

But this is not the only world title fight going down at UFC 253, which airs live on ESPN+ Pay Per View. Light heavyweights Dominick Reyes and Jan Blachowicz will square off for the title vacated by Jon Jones. It’s an intriguing bout between athletic sluggers who like to trade on the feet.

With a pair of title fights on tap, it’s time to take a closer look at UFC 253 and examine the biggest storylines of this Pay Per View fight card.

The last time two undefeated fighters faced off for a UFC title, Holly Holm shocked the world by kicking Ronda Rousey right in the face. It was a major moment for mixed martial arts.

While neither Adesanya nor Costa brings the name value and star power of Rousey into the Octagon, both fighters have built a sizable following in the combat sports space, racking up highlight reel finishes while collecting performance bonuses galore.

Adesanya (19-0, 8-0 UFC), in particular, has put together one of the most impressive runs in UFC history, going 8-0 since joining the UFC in early 2018. In a little more than two years with the promotion, he not only beat the legendary Anderson “The Spider” Silva and delivered a Fight of the Year while winning the interim title, but he also unified the belts to become the undisputed champion and eventually defended his title at UFC 248.

While recency bias may hurt Adesanya’s stock a bit — his most recent fight against Yoel Romero was easily the least entertaining performance of his career — he does have the pizzazz and flash to wow audiences with his matrix-level striking. With an impeccable sense of distance management, Adesanya routinely delivers some of the flashiest and crispiest striking MMA has ever seen.

Conversely, where Adesanya dazzles and shines, moving in and out of the pocket to avoid taking damage, Paulo Costa is a steamrolling locomotive, barreling down on the tracks with fists clenched so tight his hands may explode at any moment.

Coming off a Fight of the Night performance at UFC 241, Costa (13-0, 5-0 UFC) has been on the sidelines for over a year recovering from a slew of injuries. But during the downtime, his rivalry with Adesanya, which began before “Stylebender” became the champion, has continued to grow and grow.

At UFC 253, Adesanya and Costa will finally meet to settle their score.

Sure the grudge match angle is great, but even more impressive is the fact both fighters have managed to remain undefeated for this long, especially in a sport like MMA, where anyone can lose on any given night, you know, given all the different variables and paths to victory.

Stylistically, this is an incredible matchup because Adesanya and Costa compliment each other so well. Also, neither has ever attempted a takedown in their UFC careers, so the chances that they keep it on the feet and trade leather are quite high.

In the end, someone will have to lose. Will it be “Stylebender” or “The Eraser” who walks away victorious? Your guess is as good as mine … and I’ve been getting paid to watch fights for a decade.

A Light Heavyweight Champ Not Names Jones or Cormier

For the first time since 2011, the UFC will have a light heavyweight champion not named Jon Jones or Daniel Cormier.

With Cormier recently retiring after UFC 252 and Jones moving up to heavyweight (where he might eventually fight Brock Lesnar?), the division became wide open for a new champ. Enter Dominick “The Devastator” Reyes and Jan Blachowicz, a pair of heavy hitters intent on capturing the UFC belt.

Fight fans may remember Reyes from his controversial loss to Jones this past February at UFC 247, a fight many believe “The Devastator” won. Utilizing his speed, athleticism, and fight IQ, Reyes delivered his most impressive performance exactly when he needed to. Unfortunately, the judges disagreed and awarded the fight to Jones.

Regardless of the outcome, Reyes fast tracked himself into another title shot, setting up this bout with Blachowicz, who enters UFC 253 on the heels of three straight wins, including a pair of Performance of the Night knockouts.

The more experienced, and well rounded, of the two, Blachowicz brings his fists full of Polish power into the Octagon. And while he’s lethal on the feet, he also has some impressive submission skills, which could give Reyes fits if the fight goes to the ground.

However, Reyes, a former D-1 football standout, has the athleticism to defend the takedown and deliver powerful shots of his own.

Much like the UFC 253 main event, the co-main event is a coin flip. And, the only thing that is certain is that Bruce Buffer will be screaming “And New” when it’s all said and done.

With two major title fights, UFC 253 is a banger of a Pay Per View main card, so stay tuned for more previews and stories, coming at you daily as we inch closer to the UFC’s return to Fight Island.