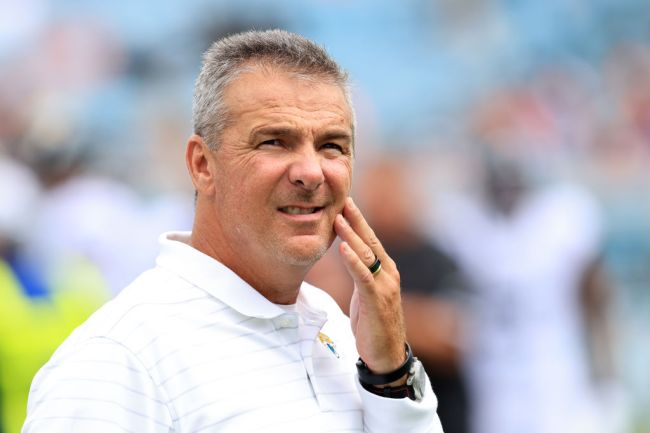 It’s been a rough few days for Urban Meyer, and his horrendous stretch all started last Thursday when his Jaguars fell to 0-4 on the year with a loss to the Bengals in Cincinnati.

The video of him getting handsy with a girl who was grinding on him at a Columbus, Ohio bar over the weekend has rightfully garnered all of the attention, one aspect in all of this has been a bit overlooked.

Instead of flying back with the Jaguars following their loss to the Bengals, Meyer decided to stay in Ohio for the weekend and visit his old stomping grounds at Ohio State.

Yes, we’re talking about professional athletes and grown adults in this situation, but Meyer deciding not to stick with his team after another tough loss is a very strange move.

Meyer was asked why he decided to stay back in Ohio after the loss and his answer didn’t make much sense at all. He thought the flight home would be a “chance for everybody to clear their head” including himself.

The thing is, Meyer explained that he had asked Jacksonville general manager Trent Baalke about staying in Ohio “way in advance.” Meyer had already made up his mind to not fly back with the team – win or loss – a long time ago.

Urban Meyer on why he didn't fly back home on the #Jaguars' plane: "I thought at the time it was a chance for everybody to clear their head, including myself." https://t.co/jJuo6g5pkY

It’s safe to say that Meyer now wishes he got on that plane with his team and flew back to Jacksonville.

Now, he and the Jags are looking at a nightmare situation off the field while they’re already the laughing stock of the league on the field.