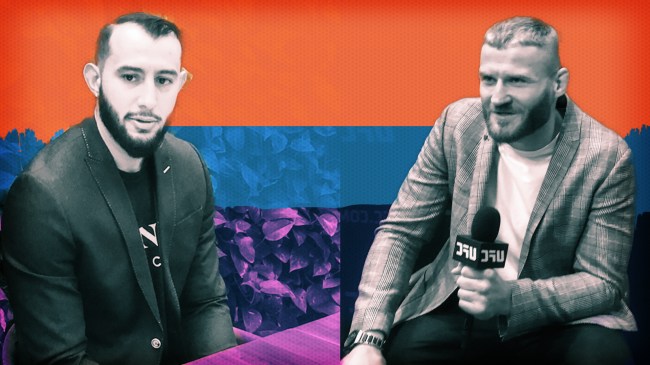 One thing’s for certain. On Saturday, September 26, announcer Bruce Buffer will emphatically scream “AND NEW!” following the UFC 253 co-main event.

With longtime 205-pound champion Jon Jones relinquishing his belt in August as part of his move up a division, the UFC has booked number-one ranked light heavyweight Dominick “The Devastator” Reyes against Polish veteran Jan Blachowicz right before the UFC 253: Adesanya vs. Costa PPV main event on ESPN+. It’s a sneaky and exciting fight. One that might just fly under the radar, but has plenty of potential to deliver a ton of action, and even a highlight reel knockout.

MMA fans may remember Reyes from his UFC 247 title fight against Jones this past February. The former D-1 football standout and high school tech manager pushed Jones, the Greatest of All Time, to the limit over five rounds, with many believing that the judges really hosed “The Devastator.”

I’m not going to say Reyes was robbed that night, but he delivered his finest performance when the lights were shining at their brightest. He proved that he’s not only a gamer and an exceptional athlete, but that he also possesses a tremendous fight I.Q., something that was never previously on display because, well, no one ever pushed him to his limits.

Beyond his power, which is not only evident in his heavy kicking game, but also in his punches, which can come from all angles, Reyes possesses a number of immeasurables. While his exceptional performance against Jones remains his career best to date, Reyes has a number of other highlight reel finishes. Just look at his October 2019 performance against Chris Weidman, when Reyes landed a perfect step-in punch while back peddling across the Octagon, or the time he knocked Ovince St. Preux out with a perfect head kick right at the final bell of the chart-topping UFC 229: Khabib Nurmagomedov vs. Conor McGregor card.

As they say, Reyes has the skills to pay the bills, but on Saturday night, he’ll encounter a primed and ferocious beast in Jan Blachowicz, a veteran who’s gone 9-5 during his UFC run, but has hit his stride at just the right time.

Riding a three-fight win streak, Blachowicz is aiming to become the UFC’s second Polish champion. He’ll do so with immense power and an underrated submission game. It’s in the clinch where Blachowicz may just make his deepest impression in the UFC 253 co-main event.

Demonstrating power in his hands during his most recent outing, knocking out Corey Anderson with a picturesque uppercut, Blachowicz possesses great skills in every facet of mixed martial arts. Sure, his five losses inside the Octagon seem alarming for a title contender, but with seven wins in his last eight outings, which include four finishes and five fight night bonuses, Blachowicz’s path to a title shot is a testament to his perseverance, heart, and of course his skill.

While Reyes is a -290 favorite in the fight, that line, which pegs Blachowicz as a +245 underdog, seems a bit wide for a fight that will, no doubt, be competitive. And, looking at their career records, it’s glaring that Blachowicz, the far more experienced fighter who has only been finished once in the UFC, is receiving such little respect at the sportsbook. This is likely because of Reyes’ 12-1 record and 75-percent finish rate.

Regardless of the odds, this is a fascinating fight, both stylistically and because it will produce the first UFC light heavyweight champion not named Jon Jones or Daniel Cormier since 2011. It’s also a perfect penultimate bout before the UFC 253: Israel Adesanya vs. Paulo Costa main event on ESPN+ Pay Per View.

A new dawn at light heavyweight! 👑