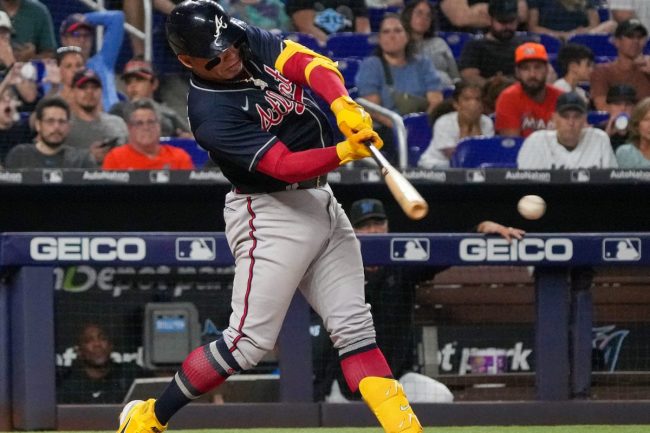 Mets fans were not happy to hear a rival hitter round the bases to the tune “Narco” after a recent home run, and they let it be known on social media.

In a recent matchup against the Braves, Atlanta designated hitter William Contreras smacked a homer deep to center field, which prompted the team to play the same song they play after every William Contreras homer.

It happens to be the same trumpet blaring walk out song that New York closer Edwin Diaz uses when entering a game in the ninth inning. After hearing the music being blasted across the loudspeakers at Truist Park following Contreras’s dinger, Mets fans believed they were being trolled by a division rival.

Contrary to their belief, the Mets don’t own the song and Edwin Diaz isn’t the only player that uses it. Apparently, New York fans and media had no idea that William Contreras uses “Narco,” and they took it personally over the weekend.

NY announcers throwing shade at William Contreras being an All-Star moments before he went deep is just chef’s kiss… pic.twitter.com/EgEYlF2clU

Mets fans got so upset after hearing William Contreras walk up to the dish to “Narco,” believing that the Braves were taking a shot. Announcers even had a few comments to say on air.

“William Contreras, and if you recognize the music, yes, William Contreras uses “Narco” as his walk-up music, which hardly seems right. Contreras DHing today, which was his role in the All-Star Game this year, somehow…”

Just as the “somehow” leaves the announcers lips, Contreras belts a shot to the deepest part of the park.

Again, the broadcast crew seems to think that Diaz is the only person allowed to use the music, saying that it “hardly seems right” that Contreras would even think of walking to the plate to the same tune.

Fans must believe the same judging by their reactions.

Contreras stealing it for his walk up song is one thing… after the home run is just straight up crap.

But it's expected with that fanbase.

This guy has a point. It wasn’t a big deal until Mets fans made the song go viral on social media.

"Nobody cared about William Contreras using that song as part of a campaign to make it to the All-Star game…but now he kept on using it after Edwin Diaz turned it into a meme and EVERYONE LOSES THEIR MINDS" pic.twitter.com/ggoUHtqKLl

I’m not sure why #Mets fans are getting mad that Edwin Diaz uses William Contreras’ walk up song. #ForTheA

Not a great look for Mets’ fans.