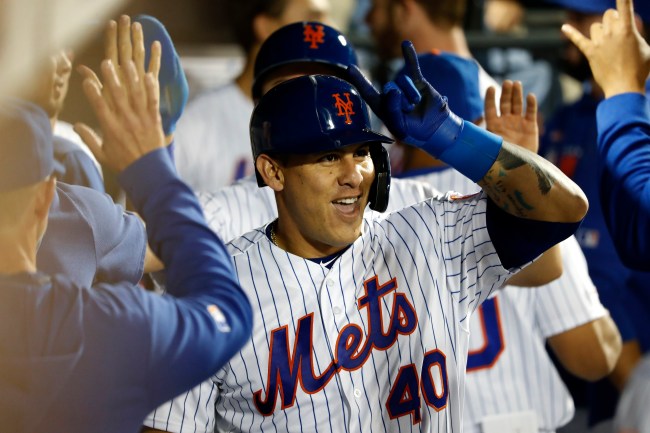 I don’t know shit about Wilson Ramos other than the fact that he sort of resembles Bartolo Colon mixed with Asdrubal Cabrera, plays for the New York Mets, and, just last season, got quite the surprise from his wife while standing in the on deck circle; where he was told the couple was going to have their third child together. Nothing there that’s all that interesting, right?

Here’s the video of Wilson Ramos wife coming down with the sign telling him that she is pregnant with their third child. Awesome stuff. Congrats @WRamosC3 family! (video via @michebag22) pic.twitter.com/rk7rUYATSa

Well, apparently the Mets’ catcher has some secret life, because, according to actor/producer Rico Simonini, the two-time All-Star was trying to slide into his girlfriend’s DMs on Instagram… from, you guessed it, the on deck circle. Now, this isn’t something new — some athletes secretly DM models on social media all the time — but, sheesh, for Wilson Ramos to be accused of doing it during a game is pretty fucking next level. Like, this can’t be true, can it?

Joining Boomer & Gio the other day, take a listen to Simonini’s story to decide for yourself if this is truly something that happened.

Now there are so many questions I have about Rico Simonini’s story that makes me wonder if this could possibly be fact or fiction. The most obvious one is this: HOW IN THE FUCK COULD WILSON RAMOS TEXT FROM THE ON DECK CIRCLE!?! Remember, this story apparently took place in 2019 — where fans were aplenty inside baseball stadiums — so it’s not like Ramos had the luxury of doing something like this during the 2020 MLB season where less people could catch him.

The second question: Let’s assume this is something Ramos would even want to do, well, how in the fuck can he pull something like this off without anyone knowing he had a cell phone in his pants? We’ve all seen where the on deck circle’s located in stadiums — it’s right by the dugout, with the manager and other coaches pretty much on top of it — so I’d imagine one of Ramos’ coaches would’ve probably mentioned something about the mobile device being with him in that moment.

Last question: Can we hear from Wilson Ramos to get the scoop on this? Like, if this is true, holy shit, what a fucking savage the dude is (and a scumbag). Not only would he be hitting on some other lady while he’s married with kids, but he’d be doing it during an actual baseball game. It’s almost too insane to even imagine it being true. Somebody has to have the receipts, right?

We’ll probably never know what happened during that fateful game between the Mets and Dodgers last season, but the fact that Rico Simonini made the claim public is pretty wild. Wilson Ramos may have some explaining to do.