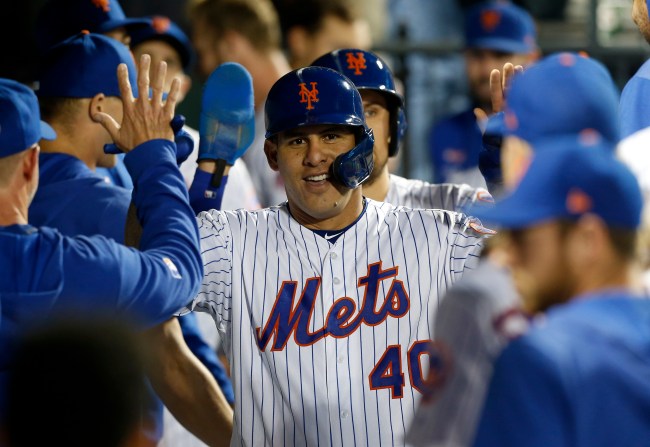 Wilson Ramos might want to talk to his wife about the timing of giving a good surprise. The catcher, a two-time All-Star who’s having a pretty solid season for the New York Mets, was on the receiving end of some big news while standing in the batters box last night against the St. Louis Cardinals, which resulted in a distracted-induced strikeout during a 2-1 game in the fourth inning.

So, what’d Wilson Ramos find out prior to his at-bat? How about the fact that he was going to be a dad again, with his wife, Yely, holding up a sign while her husband was loosening up in the on-deck circle. Talk about some bad timing, right? Here’s the video of the whole thing going down.

Here’s the video of Wilson Ramos wife coming down with the sign telling him that she is pregnant with their third child. Awesome stuff. Congrats @WRamosC3 family! (video via @michebag22) pic.twitter.com/rk7rUYATSa

Look, I’m not going to crap on Yeli for surprising her Wilson Ramos in a pretty awesome way to let him know that they’re having their third kid. I will come down on her for doing it during a baseball game in which Ramos was probably focused on his next at-bat, not necessarily what might be happening in his personal life. I mean, this is huge news, so couldn’t it have waited till after Wilson smacked a homer or something? Hell, even waiting to surprise him after the game would’ve been a cool story.

That said, because I’m a sucker for cool surprises, props to Yeli Ramos for being bold and letting Wilson Ramos know the good news. It’s exciting, so, even though I’ve got no affiliation to the Mets, you’ve got to be happy for the family — especially since Fathers Day is only a couple days away.

Let’s all just hope that this doesn’t become routine in sports, though. The last thing we need is for some guy finding out he’s about to become a dad moments before a big game or play. In this instance, I’m sure Wilson Ramos’ teammates forgave him for being a little bit distracted and striking out this time, though.