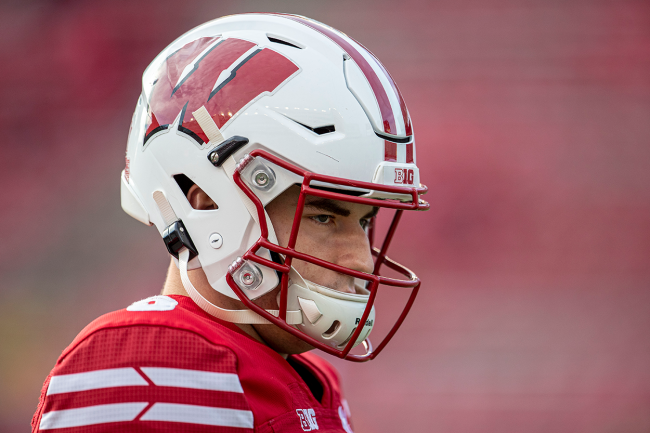 There is a lot of hype around Wisconsin football in 2022. The Badgers are coming off of a 9-4 season not long removed from a 10-win year in 2019 and will begin the year ranked No. 18 in the AP Poll.

A large part of the hype stems from two-year starting quarterback Graham Mertz. Mertz, a former four-star recruit in the Class of 2019, was the fifth-ranked quarterback in his class behind Spencer Rattler, Bo Nix, Jayden Daniels and Ryan Hilinski.

During the COVID-shortened season in 2020, Mertz took over the starting job and played well. He completed 61.1% of his passes for 1,238 yards and nine touchdowns.

There was a lot of buzz about his potential, but he also threw five interceptions and struggled to remain consistent. It brought hope for 2021.

Last season, during Mertz’s second year as the starter, his completion percentage dropped by one percent and he threw 11 interceptions to just 10 touchdowns. It was the same issue as year one.

Pick 6 to put a bow on this game for @NDFootball 👏👏 pic.twitter.com/1GrkKZDd4T

While Mertz struggled, he also threw for 1,958 yards and had flashes of excellence like this absolute dime that he dropped into a bucket for six:

What a throw! What a catch! @BadgerFootball connects for 7 to pull within 3 of Michigan just before halftime 💪 pic.twitter.com/vu7PDK2uNi

As the focus shifts to 2022, Mertz will be back as the starter for the third year in a row. And it sounds like it might be more of the same.

Wisconsin head coach Paul Chryst recently spoke to the media and offered a very telling and not-so-positive remark about his passing offense, which is obviously led by Mertz. He said that there are moments of greatness but that things aren’t quite there yet.

However, with just three weeks before Wisconsin takes the field for the first time in 2022, it sounds like there is some stuff that Mertz needs to get figured out ASAP.