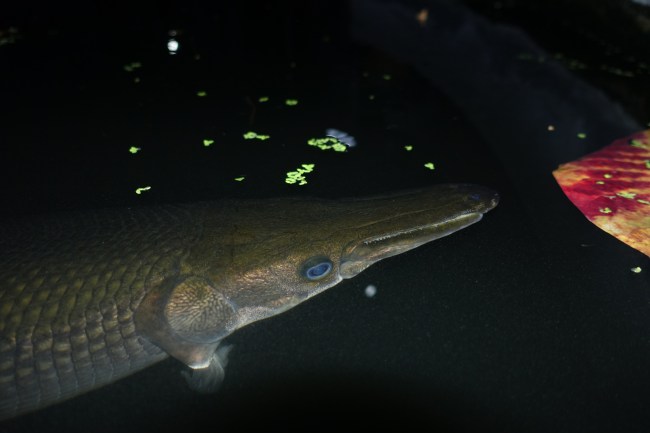 I rarely post alligator gar stories. I come across all sorts of fishing records, bow fishing records, clips and photographs of people hunting these prehistoric fish. They don’t eat these fish, it’s all about the photograph and bragging rights, and that doesn’t do it for me.

But this is a unique case. A local commercial fisherman in Vicksburg, Mississippi snagged a would-be world record alligator gar in his net while fulfilling his weekly quota of Buffalo (fish), a river sucker, and the gar he hauled in is the largest on record. He sent his photographs and story to Field and Stream and this truly was a legitimate dinosaur.

For what it’s worth, this happened years ago but Field and Stream just updated the story so it has been published again and since most of us missed the story back then I figured it was newsworthy today.

For starters, it took him forever to haul this fish into his boat. Alligator Gar usually measure a few feet in length and under 50 pounds but he quickly realized this was a prehistoric beast when it was virtually impossible to get in the 16-foot aluminum boat:

“I was almost finished for the day and had caught about 90 percent of my weekly quota,” says Williams. “It had been a good morning, the boat was full of fish.”

But as Williams began pulling up that last net, which was set in about eight feet of water 75 yards off shore, it seemed to hang up on something. “I honestly felt like I had hung up on a log. It was coming up, but it was dead weight and it didn’t seem to be moving at all. At that point I didn’t think it was a fish.” (via)

I don’t have access to the Field and Stream photographs but here’s a random pic of a large alligator gar:

Imagine snagging a fish so damn big that you didn’t even think it was a fish. That must be an unsettling and thrilling experience. The largest fish I’ve ever caught was a Blue Marlin but we were fishing for Marlin, I saw it strike the bait, I knew what was happening. If I was fishing for bonefish and managed to hook a Sawfish I’d be fucking shocked. Much like this guy must’ve been when he pulled up a GARGANTUAN alligator gar.

He really did struggle to get it in the boat:

Williams said the fish was barely alive when he came upon it, and it died soon after.
The problem at the moment was trying to get the massive fish in the boat. “I thought, Lord, don’t let him put up a fight, because he’s going to hurt me. And thankfully, it didn’t really fight that much.”

But there was a problem: Williams weighed 170 pounds. The fish, almost twice that. “I kept trying to hoist him in the boat and he kept slipping back into the net.” This went on for almost a half-hour before Williams finally managed to get both hands under the gar’s gill plates and with the last of his strength, pulled the fish into the boat.
“We landed there in the bottom of the boat together and I was so tired I couldn’t move. I was amazed at how big he was, and I still don’t know how I managed to do that.” (via)

These fish really do get huge:

When he eventually did get the gar into the boat and back to the docks then it became a massive task just to weight this beast. I imagine there aren’t too many precise scales around Vicksburg, Mississippi capable of measuring 300+ pound fish. But he was able to get that sorted out.

In total, this alligator gar weighed 327 pounds and measured 8-feet 5 1/8 inches long with a 47-inch girth. The fish was estimated to be somewhere between 50 and 70 years old.

The all-tackle fishing world record for alligator gar was a 279-pound fish caught in Texas back in 1951. Since this fish was caught in a net it won’t touch that record but the fact that it’s 50-pounds heavier makes this easily the largest alligator gar on record.

The fish has been donated to the Museum of Natural Science in Jackson, Mississippi. You can see a TON of photographs of the fish right here on Field and Stream along with a full rundown of what went into this catch.