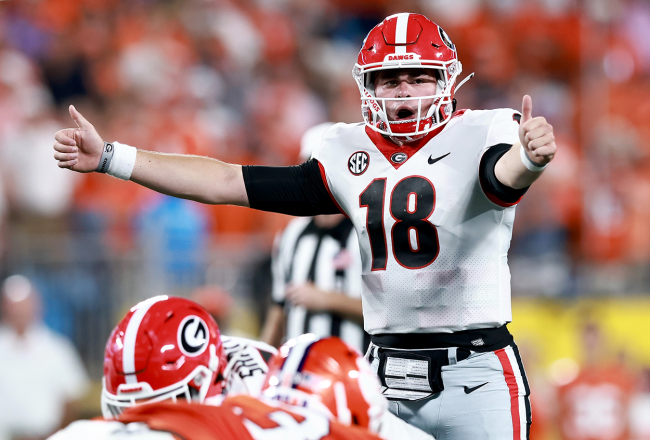 J.T. Daniels is one of the big-name quarterbacks who is flying under the radar. And understandably so.

As a five-star quarterback in the Class of 2018, Daniels committed to USC as the third-ranked quarterback in his class behind only Justin Fields and Trevor Lawrence. The latter two, obviously, have already moved on to the NFL.

Daniels, on the other hand, is gearing up for his final year of collegiate eligibility after struggling to see the field while dealing with injury during his first four years at USC and Georgia. His path has been anything but traditional, but not uncommon in the modern, transfer portal era of college football.

With the quarterback room in Athens rather crowded and Stetson Bennett returning for 2022, Daniels chose to enter the transfer portal. He ultimately ended up at West Virginia and will play in Graham Harrell’s system.

The best year of Daniels’ career came as a freshman while playing for Harrell at USC. As a result, there is a lot of hope about what he can do with/for the Mountaineers.

West Virginia was absolutely terrible offensively in 2021. However, after bringing in Harrell to run the offense, things are going to look completely different.

In addition, the Mountaineers have made 33 roster additions since January, return their top-seven offensive lineman and two of their top three receivers. And then there’s Daniels.

West Virginia head coach Neal Brown will not go so far as to name J.T. Daniels as the starting quarterback in July.

There is still a long way to go before the season begins and Daniels has yet to take a snap during an official practice in Morgantown. He was not there for spring ball and Brown says that the starting job “will not be handed to him.”

With that being said, the fourth-year head coach is thrilled about what Daniels brings to the quarterback room. Brown offered some high praise for Daniels during a recent press conference, calling him the smartest quarterback that he has had at West Virginia.

. @NealBrown_WVU had some high praise for JT Daniels, but also said he's got to win the job. "He understands that eyes are gonna be on him. And it's an opportunity for him to really prove what type of player he is. … He may be the smartest quarterback we've ever head."

Obviously, Daniels is entering a new offense. That usually takes some time to learn.

But, in reality, he is actually further ahead than sophomore Garrett Greene, redshirt freshmen Will Crowder, Jackson Crist and Jake Robbins, freshman Nicco Marchiol and senior Matt Cavallaro. Daniels has played in Harrell’s system before. He knows the playbook and he knows how to operate in harmony with his offensive coordinator.

West Virginia went 6-7 last year. Its schedule for 2022 is as follows:

Three of those 12 games are on Thursday night and very few — if any — can be penciled in as wins. It will be interesting to see if Daniels is the missing link for an offense that was in desperate need of a spark plug.