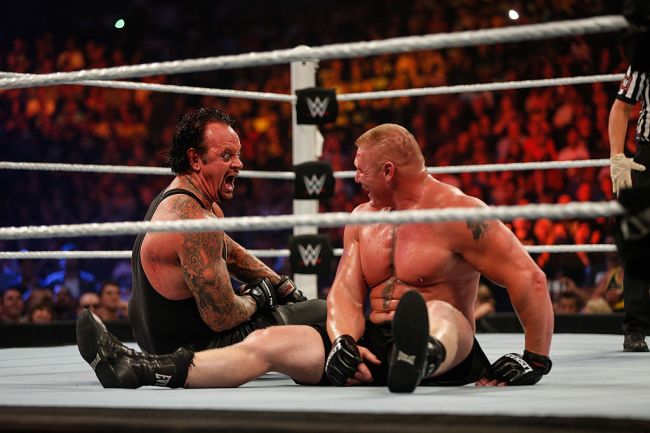 At WWE Survivor Series 2020, the wrestling world will celebrate the 30th anniversary of The Undertaker with a Final Farewell.

Past and present stars of WWE – and even some performers in other companies – have been paying tribute to The Undertaker on social media all week long.

“The measuring stick. The locker room leader. The Phenom. Three decades ago today, @Undertaker changed the landscape of sports-entertainment. His legacy is incomparable, his impact immeasurable. #ThankYouTaker. #Undertaker30,” Vince McMahon tweeted out on the day of WWE Survivor Series 2020.

The measuring stick. The locker room leader. The Phenom. Three decades ago today, @Undertaker changed the landscape of sports-entertainment. His legacy is incomparable, his impact immeasurable. #ThankYouTaker. #Undertaker30 pic.twitter.com/TWm1Ihww8U

30yrs ago today, he made his iconic #SurvivorSeries debut.
Like EVERYONE – I was in awe as a rookie in the @WWE when his first words pierced my soul as he walked in the dressing room and said, “Muthafucka” True story 😂
Honored to share the ring w you, my brother. #ThankYouTaker pic.twitter.com/ULlppOQlCa

Tonight I am very proud to be celebrating one of the greatest careers in @WWE history. A singular talent, a true leader, and a great friend. #ThankYouTaker #SurvivorSeries @undertaker

We’ve faced each other in every type of match and created some of the most special moments in my career. Standing across the ring from @undertaker was always a daunting experience but I’m excited to hear the gong toll one last time. #FarewellTaker #SurvivorSeries

Congratulations To The One And Only @undertaker! I Can’t Say How Much You Meant To Me Personally. With A Career So Extraordinary, You Deserve The Greatest Farewell Of All! WOOOOO! pic.twitter.com/rJx6WksCt2

After three decades of @undertaker committing wholeheartedly to the @WWE, tonight we bear witness to the end of an extraordinary body of work. For all the in ring moments and as a member of the @WWEUniverse, I say #ThankYouTaker! #SurvivorSeries #Undertaker30

Congratulations #Undertaker30 on a hell of a ride. https://t.co/uROvdtDeGG

It’s been an absolute honor and a privilege getting to share time and memories with @undertaker in and out of the ring over the last 30 years. Congratulations on an incredible career! #Undertaker30 #FBF pic.twitter.com/69cBZe0HCc

Showing my utmost respect to The @undertaker on his 30th Anniversary in the @WWE . Sporting this Phenom inspired, custom @Claudio_Lugli outfit and Championship title

I will be tuning in to watch your Final Farewell this Sunday at Survivor Series.

Chris Jericho had one of the funnier tributes to The Undertaker, posting this photo to his Instagram account.

The Undertaker has been making the rounds on podcasts and websites this week, telling stories about his time in the business, and even taking the Hot Ones challenge.

MORE STORIES FROM THE UNDERTAKER