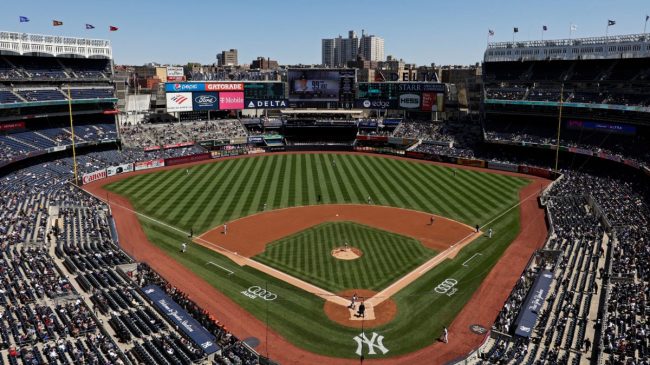 An adult website has reportedly offered the New York Yankees a considerable sum to become the club’s first ever jersey patch sponsor. The site, Stripchat, pitched the team on a $20 million partnership to have its logo on the classic pinstripes.

Here’s what the Vice President of the company had to say about the offer via Fox News.

“We want to expand the visibility of Stripchat across the globe and we know the patch will be one of the most visible assets for one of the most popular clubs in sports. What better way than to stick our logo on the sleeves of Yankees players? It makes too much sense for the Yankees to work together with the leading adult live cam site. Let’s turn pinstripes into pin-strips!”

The website is known for making these types of PR stunts. A few years ago, they offered $15 million for the naming rights to the Superdome. Now, they’re going after baseball’s biggest brand.

MLB teams will be able to sport jersey patch sponsors, similar to what we now see in the NBA, starting in the 2023 season. Some clubs have already taken advantage, locking in partnerships for next year. The Padres became the first club to do so, teaming up with Motorola.

The interesting offer for the Yankees got folks talking on social media.

Many MLB fans took a moment to comment on the recent jersey sponsor offer for the Yankees. The immediate reaction on Twitter was pretty funny.

Imagine Michael Kay saying this on a YES broadcast
"The New York Yankees are proudly sponsored by Stripchat an adult film website to get your game on" https://t.co/vN0Z9tnw3H

Something tells me the Yankees won’t accept this offer, but at least the site gets some free marketing out of the deal.