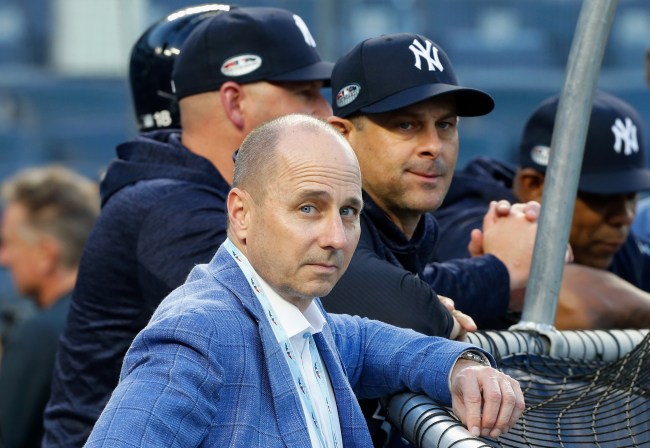 The stories everyone’s been reading from professional sports have been generally positive. Most teams and many players are stepping up, taking care of the staff, and making huge donations to keep everyone safe. But there are the stories of teams and owners leaving people out to dry. The New York Yankees are not one of those teams.

The Yankees shut down their Tampa complex on March 13 where the team and staff were for Spring Training. This included the Minor Leaguers. By March 17th, some of those Minor League players had tested positive for The Big Sick™.

I’m trying my absolute hardest to avoid saying that Yankees GM Biran Cashman ‘stepped up to the plate’ here but that’s exactly what he’s done over the past few weeks and the Yankees Minor Leaguers are singing his praises. Cashman and other Yankees executive staff have been handing out 300 meals to the Minor League players each day along with $75/day so they can stay fed. The meals were getting dropped off to the players at the hotel where they were isolated or at their apartments.

The New York Post was able to interview a few of the players on what it’s been like:

“I can honestly say that this is going to stick in my mind forever. Seeing Brian Cashman in flip-flops and gloves working his butt off to help the players shows true leadership,’’ former LSU infielder Josh Smith wrote through the Yankees’ PR office, which forwarded the email to The Post. “Along with Cashman, [senior director of player development] Kevin Reese and [director of player development] Eric Schmitt did the same each and every day when they could have been at home taking care of their families.

Yankees VP of Amateur Scouting Damon Oppenheimer joined Brian Cashman, Reese, and Schmitt in delivering the meals and money to the quarantined players over the past few weeks and it’s a personal touch that has been extremely meaningful to everyone involved:

“Seeing our bosses here supporting us makes me see that we are not just simple players for them,’’ wrote pitcher Domingo Acevedo, who has been in the Yankees’ system since 2012 when he signed as an amateur free agent out of the Dominican Republic, via email. “They also really appreciate us as people [and] care as if we were part of their family. That is worth a lot to us.’’

“All the players feel very grateful to each one of them. They have known how to support us and giving us a helping hand to confront this situation,’’ wrote Cabrera, who is from Venezuela. “I have learned that the organization is truly invested in its players and that they are capable of putting together a good emergency protocol when it comes to any situation as this COVID-19.’’ (via)

It’s unclear at what point we can expect to see Major League Baseball resume playing games because the experts are warning we aren’t even close to the peak of this epidemic yet.

You can read the full article over on the NYPost by clicking here.