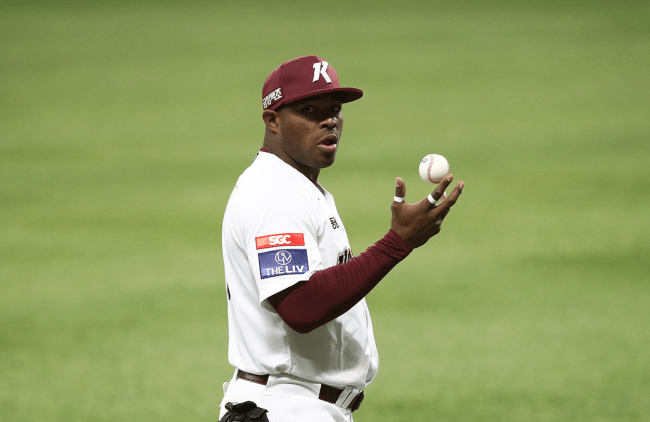 The rise and fall of Yasiel Puig is one of the most interesting case studies in MLB history. After bursting onto the scene in 2013, the man they call ‘Crazy Horse’ has not played in the MLB since 2019 and currently resides in South Korea.

Over the weekend, Puig turned back the clock and showed off his hose of an arm.

Puig, who is only 31, made his Major League debut as a young 23-year-old with the Dodgers. Over the course of his seven-year career with three different teams, he hit .277 with 132 home runs and 415 RBIs.

Despite the fact that he was still a decent contributor on offense and in the field, Puig’s temper coupled with a decline in production led to the end of his career in America. After sitting as a free agent for all of 2020, Puig got back into professional baseball a year later.

Despite his strong season in Mexico, MLB franchises did not come calling for the 2022 season and Puig signed a one-year, $1 million contract with the Kiwoom Heroes of the KBO league. Through the first month and a half of the season, he is struggling at the dish and hitting only .209.

However, on Saturday night against the SSG Landers, Puig showed that he still has a cannon for an arm and absolutely hosed a runner at the plate from right field.

During the top of the second inning with a runner on third and one out, the Landers batter popped a 3-2 pitch into right field. The runner, foolishly, tried to tag up and score.

Not on Puig’s watch. Crazy Horse delivered a laser to the catcher and caught the runner a solid four feet from home.

Puig may not be in the MLB and he may be off to a cold start in the KBO, but that doesn’t mean he won’t throw you out. Don’t run on Crazy Horse.