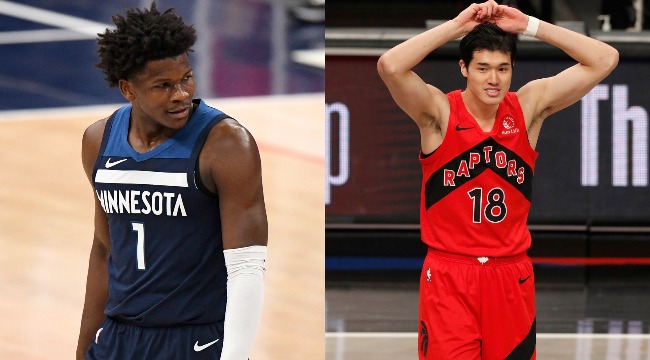 On Wednesday night, Yuta Wananabe became the first player in NBA history to start his first game after resurrecting from the dead.

The third-year Japanese forward finished with 0 points (0-3 shooting) and 4 rebounds in a 129-105 loss to the Detroit Pistons in a game where five Raptors were ruled out under the NBA’s coronavirus safety protocols. Nonetheless, a notable achievement for a guy who a few years ago was just the fourth Japanese-born Division I basketball player of all-time.

Yuta not only has to overcome the hurdle of splitting time between Toronto and their minor-league affiliate, but also fielding questions about a play from two weeks ago.

Yuta needs to retire after a dunk like this pic.twitter.com/D0LEzNmCUO

NBA Twitter came out in full force to make sure Edwards’ brutalization of Yuta would not soon be forgotten.

me still processing the dunk on yuta pic.twitter.com/2wlZzacKYt

When I see the Anthony Edwards dunk then realize it was on my Asian bro Yuta Watanabe pic.twitter.com/lFJKrJVRm9

Following Wednesday’s loss, a reporter asked Yuta about the memeification of the dunk at the hands of the number 1 pick, to which Yuta gave about as good an answer as you can in the circumstance.

“When you get dunked on like that, you often become the laughing stock/people make fun of you. But, even though I did become famous for something not great, not going for the block was never an option for me. The only regret I have is that I fouled him. I’d try to block it if I had to do it over again. A lot of players nowadays know that when you get dunked on like that, it goes viral on the internet, so they try to avoid those situations. But I don’t think I would deserve any play time if I didn’t try to block that dunk and I instead let him score. If I had 100 opportunities to block a dunk and I could block just one of those 100, I will continue to try to block them.”

Good on you Yuta.