Zach Wilson’s Dad Sends Heartfelt Message To His Son Ahead Of Crucial Matchup Vs. Aaron Rodgers 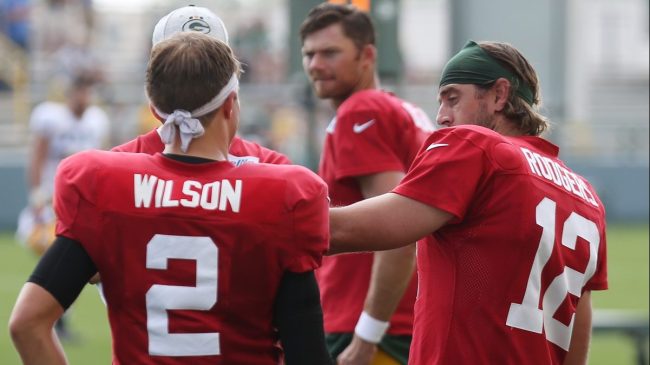 The New York Jets have a massive matchup against the Green Bay Packers on Sunday. This is a moment for this young team to prove itself, as New York has faced criticism for years. However, this seems to be a special moment for Zach Wilson and his family, as his father sends a heartfelt message ahead of the game vs. Aaron Rodgers.

Mike Wilson, the father of Zach, sends a touching tweet about the Jets’ game against the Packers. It’s a sweet moment, as his dad is incredibly proud to watch his son play in the NFL. Wilson is only in the second year of his career, and it appears he watched Aaron Rodgers’ film throughout his childhood. Now, he’s playing against him in the league.

Dreams do come true! I can’t tell you how many times @ZachWilson and I have watched Rogers on tv or studied his every movement on YouTube. Today he gets a chance to play against him. Parents if your child has a dream, embrace it. Sometimes dreams do come true. pic.twitter.com/wJlAMpNFMu

We’re all for any inspiring messages. Especially if it’s directed toward helping kids. Zach Wilson was able to make the NFL as he clearly had a goal in mind and worked towards achieving it. Some dreams are massive and it’s cool to see someone with a legitimate support system.

That’s not something everyone has. Mike Wilson’s message to his son can be used as a nice reminder to help and support those who might not have it.

Look for the Jets to give it their all on Sunday. Especially considering this is an emotional game for Zach Wilson’s family. If he can lead New York to a victory over the Packers, then it might be time to take this team seriously.