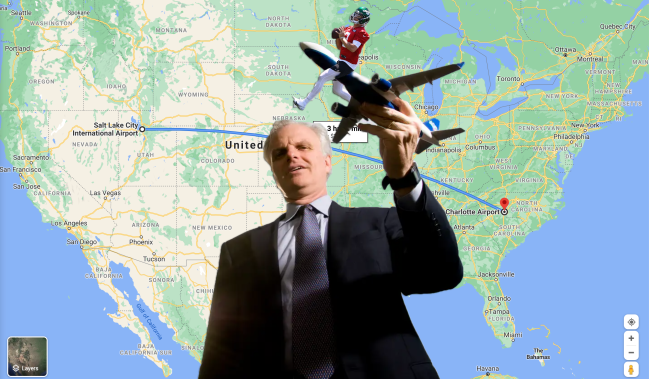 Zach Wilson and his family are the gift that keep on giving. Not only is he a talented gunslinger but those around him are a content factory.

Lisa, his mother, is the best follow on Instagram. His brother is slinging it as a sophomore in high school just like the Jets QB. Like Zach in the open field, they’re all so fun to watch.

Speaking of, Wilson’s uncle is flying 200 people to the New York season opener to watch his nephew make his NFL debut. The game takes place on September 12 in Carolina.

While it sounds cool that he is rallying the troops and bringing an away fan section to Wilson’s first game on the highest level, he is charging them each $599. Making it a paid experience is super lame.

The Panthers host the Jets at 1:00 p.m. Sunday, which happens to fall less than 24 hours after Wilson’s alma mater BYU plays Utah in the state’s biggest in-state rivalry— The Holy War.

Wilson’s uncle is making it so fans of either school and his nephew can make it to both games.

Who is Zach Wilson’s uncle?

Lisa Wilson is one of Gary and Rose Neeleman’s seven children. Her siblings are incredibly successful. One is a partner in a law firm, another is a trauma surgeon, and many are entrepreneurs.

David Neeleman stands out amongst the family. He founded or co-founded five airline companies. In addition to Morris Air, WestJet, Azul Brazilian Airlines and Breeze Airways, David founded JetBlue in 1998.

.@zachkapono1 21 years ago your uncle David founded JetBlue and welcomed you as baby nephew. So, you’ve always been family here at JetBlue and we’ve grown up together! We can’t wait for you to #TakeFlight with the @nyjets. We’ve got your ride to NYC ready! pic.twitter.com/OIwr51agUP

Along the way, Wilson’s uncle also created the electronic ticket and was first to in-flight entertainment. He’s worth a cool $400 million.

As a local prep high school star and Heisman Trophy candidate for his hometown Cougars, Wilson has a ton of fans in the Salt Lake City area.

In hopes of providing his nephew with some home-field advantage on the road, Neeleman is organizing a trip for 200 fans to take over Charlotte’s Bank of America Stadium.

As someone who is worth $400,000,000, it would be really cool if Neeleman was bankrolling the whole thing in support of his family. He’s not.

To be a part of “Wilson Weekend,” fans can buy tickets for $599 to $799. The ticket gets him/her a round-trip seat on the JetBlue charter flight, transportation to and from the airport, and a hotel to “rest 4-5 hours at before check out.”

Neeleman, a MILLIONAIRE, is selling a “once in a lifetime opportunity” to see Utah play BYU and Wilson make his debut against his team’s former quarterback Sam Darnold………….

There is very little chance that Neeleman is not making a few thousand dollars in profit here. Let’s do the math:

There are quite a few questions that Neeleman answers on the site. here are some highlights.

Q: Are there refunds if I can’t make it?
A: Due to the custom nature of this event, there are no refunds. You can have someone buy your spot up to 1 week before the game but that transaction is up to you. Once the deal is completed, please contact us. If the game is cancelled due to COVID, there will be a full refund.

Q: Does this include a ticket to the Jets/Panthers game?
A: No, you’re responsible for purchasing your own tickets to the game.

Q: What type of plane will we fly on?
A: The plane will be a new A321 with new interior, individual TVs and complementary snacks and drinks. Only carry-on luggage will be allowed.

Q: What is included?
A: A once in a lifetime opportunity.

Included on the site is an overly-detailed itinerary. Look for a few standout sections that make this whole thing even funnier—

Weird weekend with the Wilson’s.

Everything about this seems just a little bit off. It’s not technically a money grab, because the trip would cost the same or less without Neeleman’s package, but there is no way he isn’t making money here.

There was a real opportunity for Neeleman to be the coolest guy in the Millionaire space and fly out 200 of his closest friends to Charlotte on his dime. He didn’t.

Instead, he provided very minimal, rather costly accommodations without even getting people into the game.

God bless the Wilson family. They are the gift that just keeps on giving.