Zion Williamson Was Reportedly ‘Looking Forward’ To Playing For The Knicks, Which Might Be The One Flaw With Him 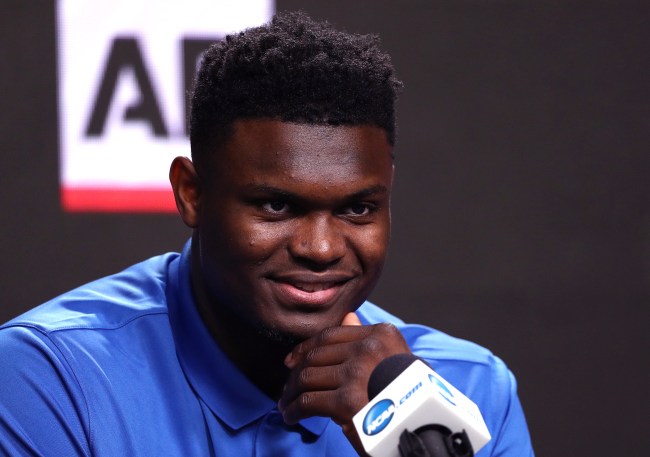 Zion Williamson is the most-hyped NBA draft pick since LeBron James back in 2003. And, while everyone was hoping that their favorite team won the NBA Lottery yesterday, when all the ping pong balls were pulled, it was the New Orleans Pelicans who ended up with the No. 1 overall pick — which, presumably, will be used to select the Duke superstar.

While I would’ve cut my right pinkie finger off for my Cleveland Cavs to have won the lottery and had the chance to take Zion Williamson, as a hoops fan, it’s kind of cool to see the Pels snag the top spot. After a long season that saw Anthony Davis publicly request a trade, then have the whole thing nixed, and then have to awkwardly monitor Davis’ playing time, New Orleans kind of deserved a little help from the basketball gods. Who knows what the team does from here, but, according to reports, Davis still wants out of the Big Easy even with the team in position to add Zion.

The excitement in New Orleans is at an all-time high after landing the No. 1 pick in this summer’s NBA Draft, but one person who reportedly isn’t too thrilled with the outcome of the Lottery? Well, that would be Zion Williamson himself.

That’s because, according to multiple sources, Williamson was actually hoping the New York Knicks would have landed in the top spot, with Ian Begley of SNY even reporting that the bullish forward was “looking forward to playing in New York.” It’s one reason why, per Marc J. Spears of ESPN, Zion was “whisked out of the room” after it was revealed that the Pelicans won the NBA Lottery last night.

Zion Williamson was QUICKLY whisked out of the room after Pelicans were announced the winner of the draft lottery. Source said the former Duke star was rooting to go to New York, but now is going to New Orleans.

Doesn't mean much now, but I had also heard that Zion Williamson was looking forward to playing in New York, excited about the opportunity. https://t.co/eXCM6EvI8W

The reports are a little surprising because, just a few months ago, Zion laughed at the notion of playing for the Knicks, with him covering his face and deflecting a reporter’s question about the possibility towards his Duke teammate, RJ Barrett. With the Knicks landing the No. 3 pick in the NBA Draft, ironically enough, Barrett may now end up in New York.

Now, I don’t want to sh*t all over the New York Knicks, but, man, why in the hell would Zion Williamson want to go there? Sure, it’s got the bright lights and all of that stuff, but didn’t LeBron James prove during his time in Cleveland that it doesn’t really matter where a superstar plays his games? Zion is as polarizing as James was 16 years ago, and, if he really thinks that playing in the Big Apple was the only way to maximize his earning potential through marketing opportunities, he clearly doesn’t know how big his superstardom is yet. Something tells me he’ll be just fine in New Orleans and still make millions off the court — if not billions, as some experts believe he can.

There aren’t many flaws in Zion Williamson’s basketball game, but the fact that he reportedly wanted to play for a dysfunctional franchise like the Knicks, who have an incompetent owner in James Dolan, makes me wonder if that’s the only thing some people may question — because, otherwise, the kid is a stud. Here’s to hoping he lights up NOLA, because, with or without Anthony Davis, that team will be fun to watch for the next couple of seasons.