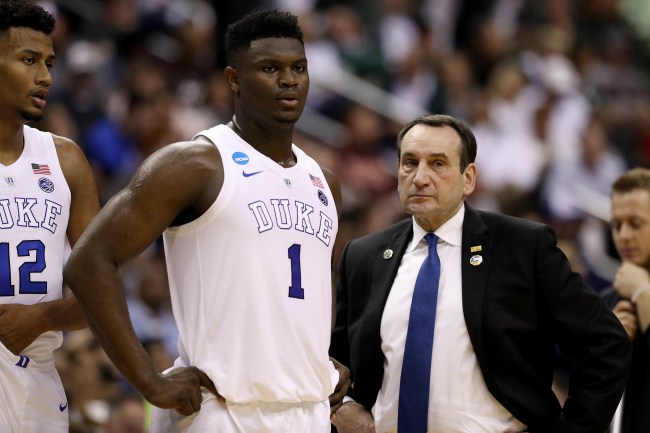 Zion Williamson has a ton of hype surrounding him as he enters his rookie campaign with the New Orleans Pelicans, and, while many were hoping to catch a quick glimpse of Zion Mania at NBA Summer League, things didn’t go as planned after the No. 1 overall pick had a minor injury that, for precautionary reasons, held him back from playing. It was a bummer for fans, to say the least, but the Pelicans have to do everything they can to protect the future of their franchise.

Following the small injury, though, Zion Williamson remained around the Pels’ Summer League team, with a few pictures popping up of the former Duke star looking a little hefty. Williamson’s weight instantly became an Internet joke, with people calling him things like “Scottie Chicken” and ‘Dikembe Mo’Gumbo,” while ESPN analyst Seth Greenberg ripped the kid for being out of shape.

All of this was probably to be expected considering Zion hasn’t played a meaningful basketball game since March, but it’s still a pretty unfair for him to have to deal with. Hey, welcome to the NBA, kid.

One guy who came to the defense of Zion was his former Duke head coach, Mike Krzyzewski, who explained why he thought Williamson should’ve never participated in the NBA Summer League to begin with. Here’s what Coach K had to say to Adam Zagoria of Forbes, per The Big Lead.

“No, I thought really he never should’ve played just because he’s been on this circuit of awards, the ESPYs, everything,” Coach K told me at the Peach Jam in North Augusta, S.C., where he’s recruiting this week. “I don’t think he’s in the playing shape or the mental shape to play.”

Look, Coach K’s clearly protecting a guy who, in the same interview, he said he “loved,” but he does have a point. Obviously, the NBA is going to do everything it can to market Zion Williamson to help drive fan awareness and engagement to help promote the sport, but the Duke head coach knows that the kid probably wasn’t going to be ready to play — especially when considering Williamson only played in seven games following that freakish knee injury after his shoe blew up on February 20 against North Carolina.

With the NBA regular season still 3.5 months away, Zion has plenty of time to get back in the groove and return to his usual form, so nobody should be worried about that. But this serves as a lesson for him to realize just how critical everyone will be of him now that there’s so much hype around his pro career.