Jerry West Gives Zion Williamson The Ultimate Level Of Respect When Talking About Duke Star Going No. 1 In NBA Draft 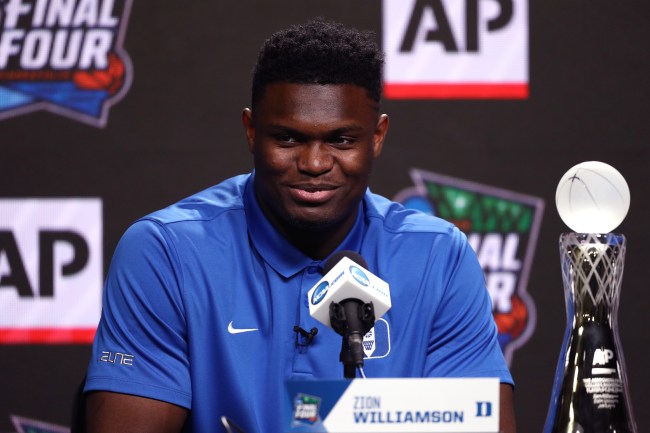 Zion Williamson has been the consensus No. 1 overall pick in this year’s NBA Draft since, oh, he posterized his first victim while playing for the Duke Blue Devils as a freshman last college hoops season. With every single NBA team “not tryin’ for Zion,” is there really someone in a team’s front office who dare overthink things and try to find a flaw in Williamson’s game? Seriously, the dude is as hyped as LeBron James was 16 years ago, with some experts thinking Zion Williamson could earn over $1 billion in earnings from his hoops career when all is said and done. That’s insanity.

Given the fact that Zion Williamson is believed to be a once-in-a-generation talent, the silhouette on the NBA logo and hoops legend, Jerry West, offered up some serious praise to the teenager. Not only did West say that he thinks Zion should absolutely go No. 1 overall in this year’s NBA Draft — duh, dude — but he also said that passing on him would be similar to passing over Michael Jordan, which two teams famously did in the 1984 NBA Draft when MJ “slipped” to No. 3 overall behind Hakeem Olajuwon and Sam Bowie.

Speaking with Dan Patrick, Jerry West — who’s a consultant for the Los Angeles Clippers — talked about how much respect he has for Zion Williamson, while delivering serious praise about what his NBA future looks like. Take a look below.

“I think it depends on the team, but I don’t know how you could pass Zion Williamson, I really don’t,” West said when asked who should be the number one pick. “It would be like passing Michael Jordan in the draft.”

“I’ve never seen a body, that quick, react the way it does. He has got incredible balance,” West said. “Everyone now will be on the edge of their seats to watch him play, to see what he’s going to do next…. His game is going to work very well in today’s modern NBA game.”

Here’s video of the segment with Jerry West talking about Zion Williamson.

Anytime a basketball player gets mentioned in the same breath as Michael Jordan, that’s some serious props. The fact that it’s coming from a legend like Jerry West — who has been around the NBA since 1960 both as a Hall of Fame player and a top executive with both the Lakers and Warriors — is even more impressive for Zion Williamson.

With Zion being compared to everyone from a smaller Shaquille O’Neal to Charles Barkley to Larry Johnson, among others, there’s no telling where his ceiling might be. But, according to Jerry West, if a team passes over Zion Williamson like they did Michael Jordan 35 years ago, they may regret it for the history of the franchise.