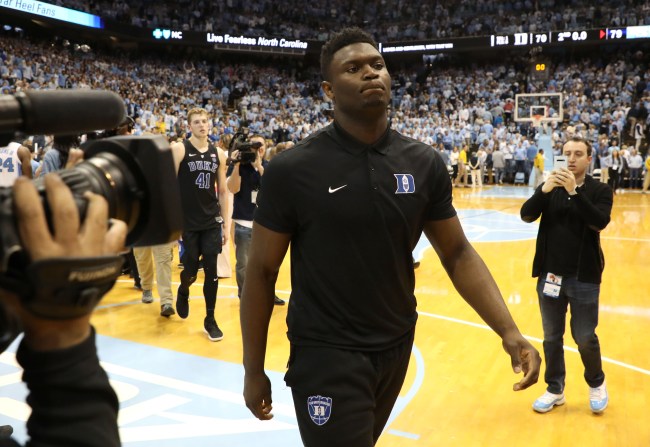 Zion Williamson is the nastiest college basketball player most of us have ever seen. Standing 6’7″ and weighing 284 pounds, it’s absolutely bonkers that the Duke Blue Devils freshman can do the freakishly athletic things he does. It’s because of that athleticism that everyone assumes the kid is destined to be the No. 1 overall pick in this year’s NBA Draft, a bona fide superstar in the Association and, according to some experts, could earn $1 billion by the time his playing days are over.

While Zion Williamson is as sure of a bet as anyone to become a star in the NBA, Charles Barkley is pumping the brakes a little bit before we proclaim he’s the next big thing. While nobody knows what Zion will become in the NBA, Barkley at least suggested there’s a factor that could prevent Williamson from taking over the league as everyone already thinks he will — and it’s simply how the current NBA is being played.

After Syracuse head coach Jim Boeheim compared Zion Williamson to Charles Barkley when he was coming out of Auburn for the NBA, Sir Charles took the chance to admit that, in today’s NBA, he may have struggled with defensive assignments, playing smaller and faster guys as opposed to being in the block. Here’s what Barkley had to say during a media event for this year’s NCAA Tournament, per FTW.USAToday.

“I think the way the game is played now, he’s going to be chasing threes and fours (small forwards and power forwards) on the floor, it’s going to be difficult,” he said during a CBS and Turner media event ahead of the 2019 NCAA Tournament. “I’m smart enough to know as a basketball player, it would have been more difficult for me to defend threes and fours in today’s game, than just getting in the box and beating the hell out of each other. I don’t know if he’s going to be a three or a four, and that won’t be easy.”

“But,” he added, making a point about projecting college stars in the future, “you can’t tell til they get to the pros.”

As much of an athletic freak as Zion Williamson is, Charles Barkley does have a point here. Given Zion’s bulk, putting him against someone like Paul George or Giannis Antetokounmpo — who are both long, strong and can create their own shots — could be a problem for the talented phenom. But, as Barkley says, until we see Williamson forced to defend a guy like that, we won’t know for sure how he’ll look.

It’s hard to think that Zion Williamson won’t be the superstar everyone believes he’ll be at the next level. But, as we know, nothing’s a sure thing, so Barkley’s simply stating the one factor that could keep Williamson from truly reaching that superstar ceiling. Given what we’ve seen from the kid in college so far, though, there’s no reason to think he won’t be able to adapt to defending some of the NBA’s elite small and power forwards.