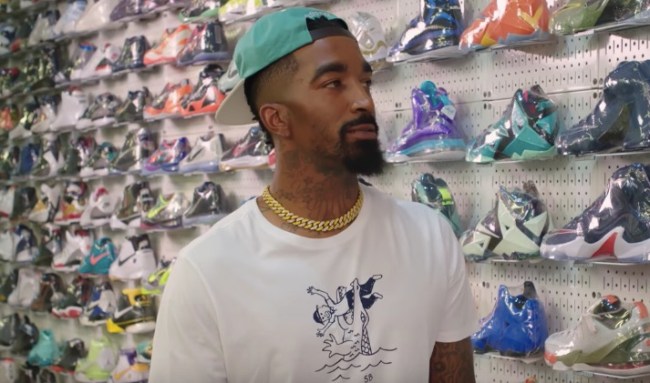 Sneakers and the NBA are inextricably linked.

NBA players are the biggest driving force behind the sneakers industry. The styles they released are snatched up by millions of fans. The shoes they wear are able to help them perform better on the court.

On the court and off, NBA players are the tastemakers and the models for the best, newest, and rarest sneakers on the market. They get access to sneakers the regular person cannot even fathom.

J.R. Smith might not have his own line of sneakers selling out worldwide like LeBron James or Steph Curry but he’s got the next best thing, he owns a sneaker shop named Team Swish with his dad back in his hometown of Millstone Township, New Jersey.

For the latest episode of ‘Sneaker Shopping’ from Complex with Joe La Puma, J.R. Smith goes sneaker shopping at Stadium Goods in NYC which is home to some of the rarest sneakers money can buy. J.R. Smith rocks a size 15 shoe so buying sneakers can be a massive pain in the ass for him. Thankfully, he’s got some well-connected friends in the sneaker industry to help make his life a little bit easier. 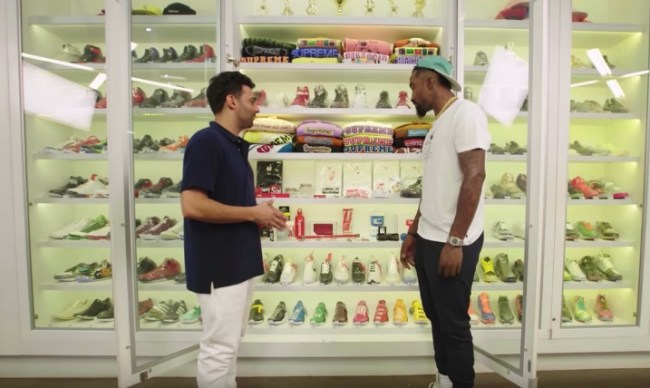 In the interview, J.R. Smith talks about growing up in New Jersey, his relationship with his father, wearing fellow player’s signature lines in the NBA, and more.

The last time we saw J.R. Smith on the court was in the NBA Finals where he famously dribbled the ball out and potentially cost the Cavs a game-winning shot with seconds left. After that, LeBron James left for Los Angeles and we haven’t heard much from J.R. in months so it’s good to see that he’s in high spirits:

When asked if he’ll still lace up in LeBron’s sneakers next year he as this to say: “Yeah, absolutely. I’ve had bad relationships with people who’ve had their own signature show and I’ve still worn their shoe. I just tell them I look better in it (than they do). Yeah, that’s my brother. I’ll always wear his shoes.”

I don’t know what it is about these ‘Sneaker Shopping’ videos with Joe La Puma that always captivate me but I’d easily watch a 30-minute version of these episodes if they were on TV. I’ve got a bunch of these videos here on BroBible so if you want to check out some of the previous episodes here you go:

READ NEXT: Cristiano Ronaldo Goes Sneaker Shopping In Beijing And Talks About The Origins Of His New Shoe

READ NEXT: Scott Disick Dropped Over $15,000 Sneaker Shopping, Check Out All The Kicks And Gear He Copped