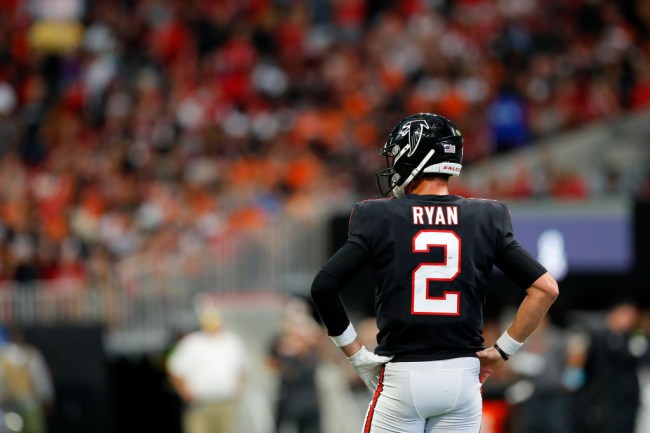 The Atlanta Falcons suffered a crushing defeat at home to the Cincinnati Bengals on Sunday by a score of 37-36, dropping them to the basement of the AFC South. Matt Ryan and the Falcons aren’t nearly as bad as their 1-3 record dictates, with their quarterback going 29-for-39 for 419 yards and three touchdowns a week after going 26-for-35 for 374 yards, and a career-high five touchdowns in an overtime loss to the Saints. Eight touchdowns, zero interceptions in two games. Both losses. How.

In any event, if there’s one thing the internet is good at it’s kicking a man when he’s down. And after two stellar performances by Matt Ryan that ultimately were meaningless, the 33-year-old quarterback has to be feeling pretty shitty right now. Especially after the entire internet skewered his ‘average guy’ outfit he wore upon arrive to Mercedes-Benz Stadium yesterday…

Allow me to begin.

Matt Ryan looks like he only leaves positive Yelp reviews–“Yummers!”

Matt Ryan is dressed like he still keeps in touch with his ex-girlfriend’s dad.

Matt Ryan looks like he uses his blinker when turning out of his driveway.

Matt Ryan looks like he uses the word “henceforth” in spoke word.

Matt Ryan looks like he watches the Super Bowl for the commercials.

Matt Ryan looks like he calls a joint a ‘marijuana cigarette.’

Matt Ryan looks like a guy who has two first names.

Matt Ryan looks like he blew a 28-3 third quarter lead in the Super Bowl.

And from the interwebz:

Pretty sure he’s thinking about whipping up a salmon salad to pair with a white wine he just bought on the way to this stadium today. “Balsamic vinaigrette or an artisan olive oil for the dressing though? Might have to check down into lemon basil.”

hi i’m matt ryan, and i’d just like to say that the gap… is back

in every photo Matt Ryan is confidently strolling into a Trader Joe's looking for green tea mochi bites and cookie butter https://t.co/ByaPvY4laV

This is the most regular looking athlete I've ever seen https://t.co/04Z4tJ9f0s

This looks like it can be the default photo that department stores put in frames.

walking into banana republic with a time sensitive 40% off coupon like https://t.co/JKbSl9coEh

Poor bastard got nailed to the cross for dressing like a regular human.