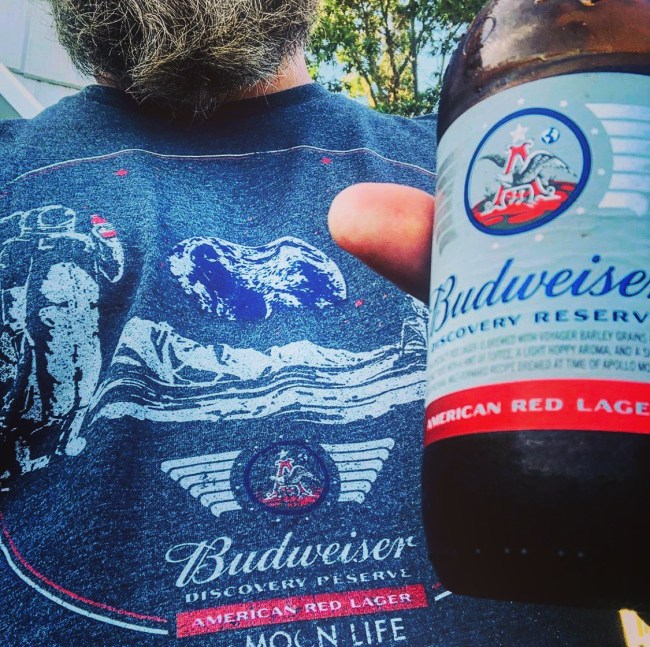 In partnership with Budweiser Discovery Reserve

You probably already know about the dopest t-shirt collaboration of the summer, which saw Budweiser and Highly Clutch team up for some epic designs to commemorate mankind’s very first moon mission 50 years ago. The limited edition t-shirt collection — which features plenty of cosmic flare only appropriate for a one-of-a-kind SPACE BEER — was born from Budweiser’s limited edition Discovery Reserve, a Budweiser Reserve collection beer that debuted earlier this summer. An American red lager, it features a light hoppy aroma with a toasted barley malt taste, a hint of toffee and a sharp finish.

Since there’s only one way to acknowledge such an iconic world event — with limited edition t-shirts — the Budweiser Discovery Reserve + Highly Clutch collab came to fruition.

The complete collection of tees are badass, but we wanted to know more about the inspiration behind them. That’s why we talked with Nate Gonzalez, the designer and operator of Moon Life Clothing, the brand that designed the shirts, to figure out how he landed on some of the graphics. As it turns out, the guy’s quite the moon geek, and paid homage to his high school buddies to create his current company — which is pretty dope.

Take a look at what Gonzalez had to say below and throw him a follow on Instagram.

A post shared by The Moon Life Clothing (@themoonlifeclothing)

“A lot of my inspiration comes from retro design aesthetics in general. So, when coming up with designs for shirts with the 50-year anniversary or the first moon landing, I wanted to create designs that feel like they came from yesteryear, while incorporating the Budweiser and Moon Life branding/ideologies in a seamless way. Budweiser did such an amazing job incorporating all these little details into the Discovery Reserve beer label, like the flight wings and the and having the Anheuser-Busch eagle logo on the moon, with the earth in the background. 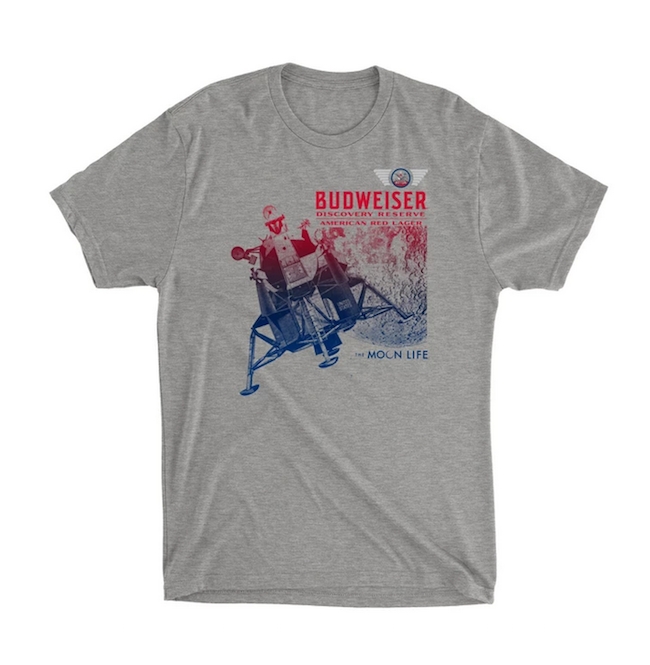 Let’s talk about your interest in outer space and space travel. Where’d that come from?

“Oh man, I can’t think back before a time I was deeply interested with space. I can pretty confidently say that it all stemmed from my mom letting me rent whatever movies I wanted to as a kid, and me renting Star Wars probably a dozen times by the time I was 8.” 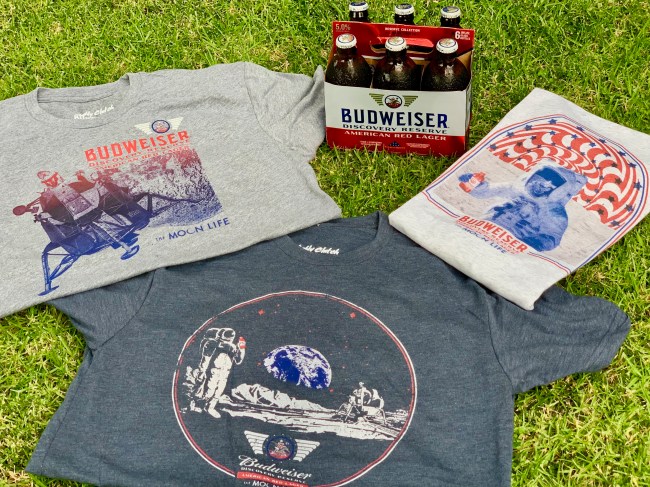 “Similar to how I got into space stuff, I’ve always loved skateboarding; the freedom, style and designs especially were appealing. It definitely started with my mom getting me a Tony Hawk Birdhouse when I was 8, and collecting skate stickers and shirts in the mid-to-late ’90s and early-2000’s. I don’t get out as much anymore as I used to, but still love it and try to hop on a board as often as I can; without hurting myself.”

Tell us a little bit about The Moon Life Clothing. How’d you get started?

“So I’ve always wanted to have a clothing company and create for as long as I can remember. I actually had my first clothing company back in high school with a few friends. We would sell shirts to kids in high school and at the skatepark and throw BBQ’s and skate competitions and stuff. After going to college, the whole thing just kinda dissolved, and, unfortunately, I just fell out of contact with all of them. 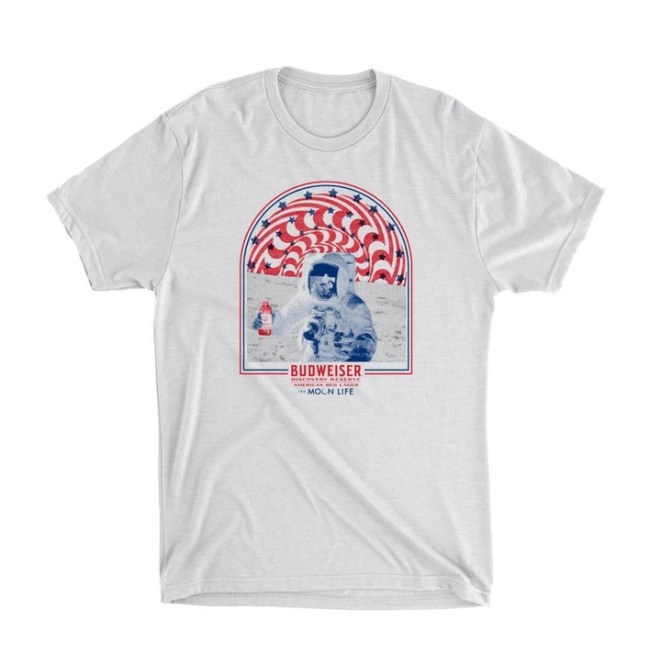 “Fast forward a few years, I’m taking a summer class in college and we had to come up with a business and make a catalog for it with advertising, etc. So, that summer, I developed a whole fake brand/line called ‘The Moon Life’ (The name ‘The Moon Life’ actually comes from the name of a song from some of my best friends from high schools band Alarrmed, so it’s a way to pay respects to my roots and music, as well as my love for the Moon and the cosmos).

“I kinda put it on the back burner while I finished out school. I finished school, drove across the country for two months with my now fiance, and, when I got back, started my plan with my best friend Greg to make it happen. I do all of the design work and screen printing myself, and we drop a new limited edition every month on the night of the full moon.”

A post shared by The Moon Life Clothing (@themoonlifeclothing)

Tie-dye has had such a triumphant comeback in the fashion world and you’re leading the charge. How’d that start?

“I can’t say for sure, but I can speculate that it has something to do with Dead & Co. forming and the mainstream success they’ve had. Of course, John Mayer’s fashion influence, too.

“Online Ceramics has definitely helped color this generation in tie dye, and I think they’ve brought it to the forefront of a lot of people. Lazy Lightning Dyes has been doing some killer work, too. They even just did some dyes for JRAD.”

You’ve done some amazing work with musicians and bands for poster art. A couple of favorites?

“Thank you! I’d have to say Dean Ween Group. Ween is one of my all-time favorite bands, so to be able to work with one of my favorite guitarists was/is a pretty awesome experience.” 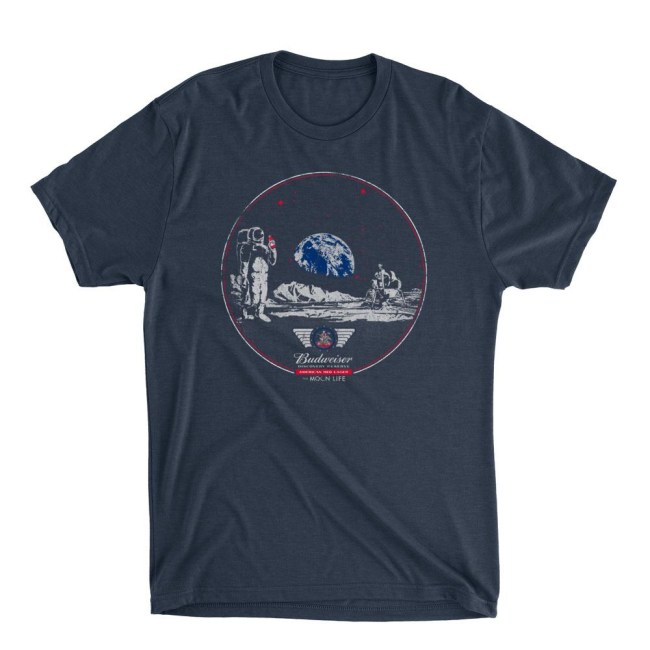 “Oh, man, this is too tough. But I ‘m a classics guy overall. They are classics for a reason. I’ll break it down to a few though. Book series: Dune, hands down. God Emperor of Dune, especially. I can’t wait for Villaneuve’s film adaptation of the series. I’ve been getting more into Asimov’s Foundation as well.

“Tom Sachs would be a fun one. Or Elon Musk. I’d love to do something with Pink Floyd or, like, Hawkwind. Of course, the Dead, too. With a brand, I respect the shit out of The Hundreds, so doing something with them would be exciting. Oh, or Alien Workshop.”

You can now buy the collection via Highly Clutch, commemorating today’s 50th anniversary of the lunar landing. 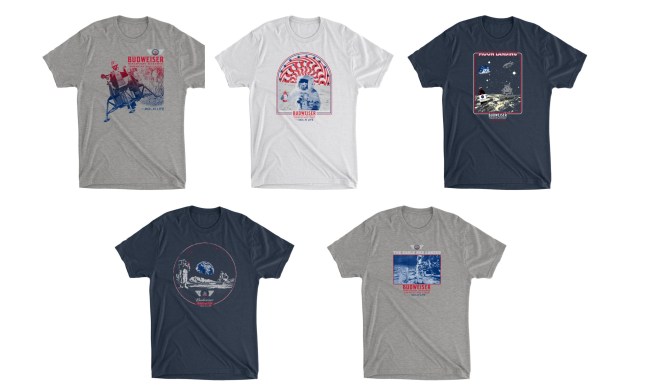 Grab some Discovery Reserve this weekend to properly toast the occasion.

And remember – For this weekend and the rest of the summer, Bud is donating $1 to the Folds of Honor Foundation for every 24-pack of Discovery Reserve sold.