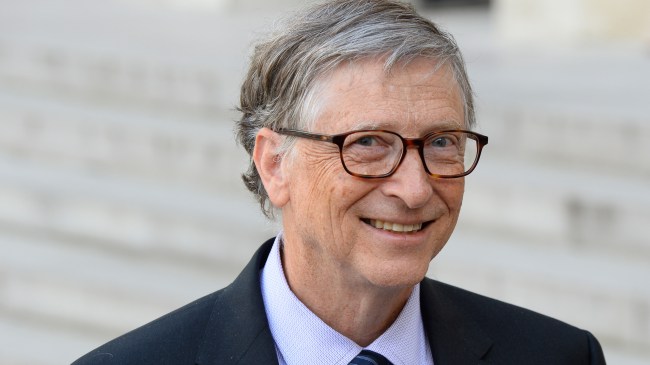 During his seventh Reddit “Ask Me Anything” session this week, Bill Gates was asked what do he thinks he, personally, should be paying in taxes each year. His answer was freaking great.

“I think our system can be a lot more progressive (that is richer people paying a higher share).

“A key element is making capital gains taxation more like ordinary income (some have suggested making them the same) and having an estate tax more like we had in the past (55% above $3.5M)

“European countries collect a lot more taxes but through consumption taxes but those are not progressive.

“If people want the government to do more it needs to be funded and I see us needing to improve our education and health services.

“So yes I have paid $10B but I should have had to pay more on my capital gains.”

One, that is very refreshing to hear from someone with more money than anyone in the entire world, depending on what day it is – and when Amazon’s Jeff Bezos eventually gets divorced.

Two, as Reddit user Xx420Swag420xX commented in response to Gates saying he paid $10B… “Hardest flex of all time.”

Hard to not love the guy. After all he’s the same man who said his measure of success is “Do the people you care about love you back?” and has donated billions to charity and other worthy causes.

He and his wife Melinda also recently published their annual letter and this year they discussed nine things that surprised them and inspired them to take action.

1. Africa is the youngest continent.
The median age there is just 18. In North America, it is 35. And the number of young Africans is expected to rise in the decades to come

3. We will build an entire New York City every month.
The world’s building stock is expected to double by 2060 — the equivalent of adding another New York City monthly between now and then. That’s a lot of cement and steel.

4. Data can be sexist.
We like to think of data as being objective, but the answers we get are often shaped by the questions we ask. When those questions are biased, the data is too.

5. You can learn a lot by processing your anger from teenage boys.
It’s an important life skill, part of becoming a mature adult.

6. There’s a nationalist case for globalism.
At a time when new outrages seem to dominate the headlines every day, we want to keep reminding people that life is getting better for millions of people in the world’s poorest countries, thanks in part to smart investments in health. Even if you only care about the welfare of your fellow citizens, these investments are overwhelmingly smart things to do. Progress benefits everyone.

7. When was the first modern flush toilet patented?
More than 2 billion people around the world lack access to a decent toilet. [The answer is 1775, by the way.]

8. Textbooks are becoming obsolete.
One study found that using open courseware saved students an average of $66 to $121 per course. (Over an academic year, that can add up to $1,000, which can be the difference between staying in school or having to drop out.)

9. Mobile phones are the most powerful in the hands of the poorest women.
…women are not only using their mobile phones to access services and opportunities. They’re using them to change social norms and challenge the power structures that perpetuate gender inequality.