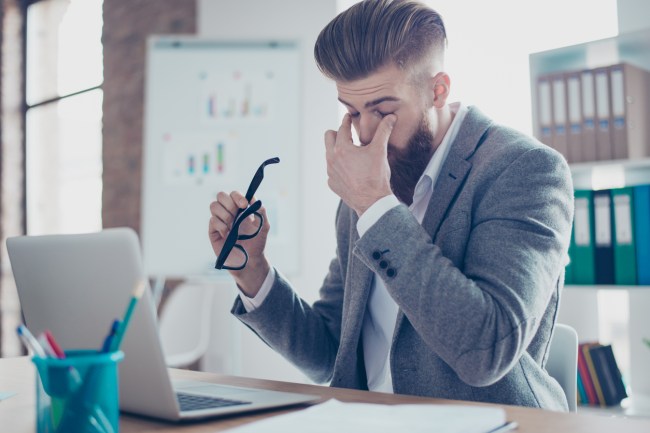 It’s hard to deny that getting a solid night of sack time is crucial to anyone with a master plan to dominate the world. Although we always hear stories about highly successful juggernauts of art and industry who got to where they are today with little to no sleep, the majority of us require at least a few hours of shut-eye every night to keep us functioning like normal human beings.

Yet, there are plenty of times when sleep is just not possible. Insomnia sets in for one reason or another and all of a sudden we’re walking around the office like we’ve been lobotomized by a thrill-kill cult of zombie soul suckers. Or, you know, something to that effect.

What’s important to understand is that (aside from a vicious hangover) sleep deprivation is the one mental agitator that can prevent even the most ambitious motherfucker alive from achieving rockstar levels of greatness. It’s not just because the cartoon state where most insomniacs reside ensures a person is exhausted most of the day, as a new study has found a lack of sleep more than doubles the risk of developing an anxiety disorder.

At the annual Society for Neuroscience meeting in San Diego last month, researchers showed how suffering through even one sleepless night sets the human brain on course for an anxious disaster.

According to Popular Science, researchers told those in attendance that:

If we are chronically sleep deprived, if we keep losing sleep, it could sensitize us to greater anxiety levels and help develop an anxiety disorder.”

To come to this conclusion, analysts recruited around 20 volunteers and locked them away in a sleep lab for a couple of nights.

The participants were then put through one night of sleep deprivation before being allowed a full night’s rest on the second. After looking at the results, the scientists behind the study found the anxiety levels of their subjects rose around 30 percent on the night they failed to get an adequate rest.

In fact, nearly half of the participants were so bad off that they could have been diagnosed with “clinical anxiety disorder.”

Although it might not sound like a significant issue, walking around in a sleepless state could have negative consequences when it comes to a person’s decision-making ability.

The study also shows people who are sleep deprived are more likely to be susceptible to negative emotions. While a well-rested individual might be inclined to brush off the fact that their boss or a fussy client is acting like a complete ass-gasket, someone who is sleep deprived is more likely to tell them to go fuck themselves.

While it is necessary to stand up for yourself and take charge of your own destiny, unleashing a barrage of obscenities on your meal ticket is never the best course of action. Therefore, getting a good night’s sleep is essential to playing this chess game with a little savoir-faire.

“When we are well rested, regions that help us regulate emotions are the ones that help keep us less anxious and keep us calm, and those regions are very sensitive to sleep loss,” said lead researcher Eti Ben-Simon, a postdoctoral fellow in the department of neuroscience at the University of California, Berkeley.

“Once we are losing a certain amount of sleep or a whole night of sleep, these regions are basically going offline and we’re not able to trigger those processes of emotion regulation.”

Thankfully, this anxiety is easily dissolved.

Researchers said even the most sleep-deprived person can hit the proverbial reset button by simply getting an appropriate amount of rest. However, those high anxiety levels that stem from extended periods of sleeplessness can make it challenging to get there.

Experts say some anti-anxiety medications might help, but some of them— including benzodiazepines— do not offer any relief. They might help a person get to sleep, but they will not linger in the REM stage long enough to feel rested.

However, there is evidence that some cannabis strains (namely indicas) are great for insomniacs. If you fall under that label, you should search for strains that have a large content of marijuana’s unsung hero: cannabinol (CBN). Just be sure to steer clear of those strains that have a high level of THC, as it can make anxiety even worse.

Is Drinking Human Blood The Secret To Long Life? New Health Study Suggests It Might Be