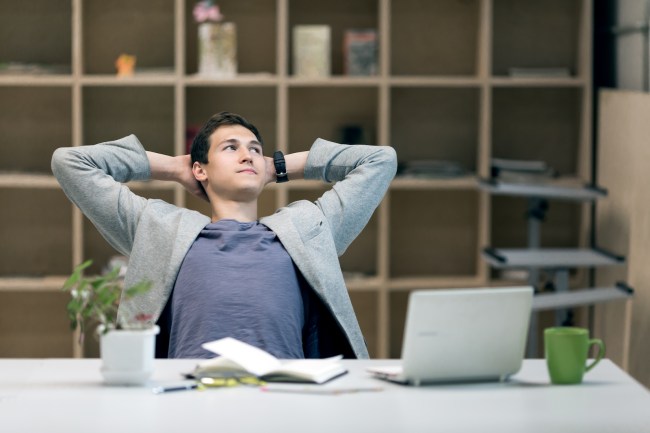 Have you ever experienced a moment where you’re wide awake, but the entire world seems to melt away?

It can happen anywhere – at work, behind the wheel, in the middle of a conversation or standing in line for coffee. One minute you’re completely present and the next you’re staring at nothing and thinking about nothing in particular.

People tag these moments as zoning out, but in actuality, they’re instances of “microsleep.”

Yup, you might not realize it, but you’re literally asleep with your eyes open.

During microsleep, parts of the brain basically offline for a few seconds while the rest of the mind is wide awake. While tiredness and fatigue do play a role, microsleep can happen to even the most rested brain and body.

The cause of microsleep is a mystery to researchers, but a recent study sheds light on precisely what’s going on inside cerebellum during these quick cat naps.

“A study from 2015 sheds light on the brain mechanisms at work.

In the experiment, people awake for a grueling 22 hours had their brain activity monitored after entering a dark fMRI machine. When participants briefly drifted into microsleep, researchers observed that the brain’s thalamus became less active. This part of the brain regulates the sleep-wake cycle and acts as a sensory gatekeeper, sending incoming information to other parts of the brain for processing.

But surprisingly, during these moments of microsleep, activity in parts of the brain responsible for paying attention ramped up. Activation in these regions are likely our brain’s way of staying awake and preventing us from fully succumbing to the urge to sleep. And it might explain why many people can still perform tasks in auto-pilot mode, even though a key part of their brain is asleep.”

The real danger comes when microsleep happens to people who NEED to focus at all times. Pilots, train conductors, roofers or most construction workers and any jobs on this list spring to mind.

Microsleep happens to all of us, but researchers explain there are ways to combat the issue, so it doesn’t happen as frequently.

Naturally, sleep is a remedy, but not just the amount of sleep at night.

Naps during the day are crucial.

“For now, the best way to prevent microsleep seems to be simply getting adequate amounts of good-quality sleep. The next best thing would be a nap after a night of tossing and turning, as a NASA study found back in 1994. Sleep-indebted pilots who were allowed to take a 40-minute nap before a test flight only had 34 microsleep episodes in their last 90 minutes of flight, compared to 120 among the non-napping group. “

If your workplace frowns upon napping at your desk, there’s an alternative. Grab some shut-eye in your car at lunch.

If you have trouble dozing out, try this military trick that’s guaranteed to knock you out in two minutes.

And be sure to monitor the quality of your nightly sleep and break your bad habits.

And finally, turn the goddamn screens off and go to bed.