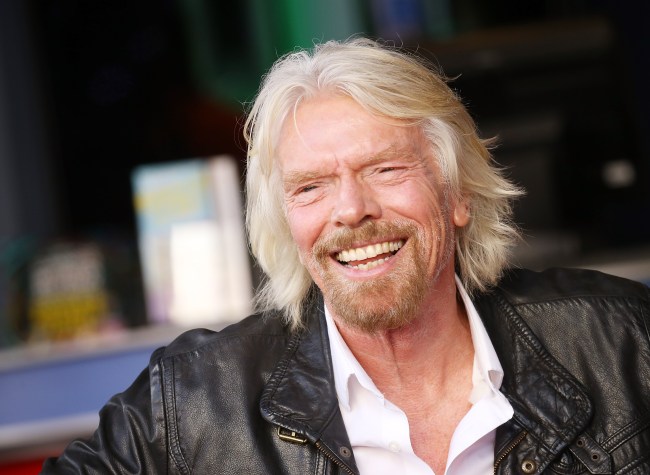 Richard Branson could just quit now and leave a legacy that will not soon be forgotten. The 68-year-old founder of the Virgin Group is worth an estimated $5.1 billion, appeared on Time magazine’s list of the 100 Most Influential People in The World, and was even knighted at Buckingham Palace in 2000 for “services to entrepreneurship.”

But the man who started a magazine at the age of 16 isn’t wired to shut it off. We’re talking about the dude who kite-surfed with a naked model on his back and ran the London Marathon in 2010 dressed as a butterfly.

I ran the @londonmarathon dressed as a butterfly. What’s your favourite marathon costume? https://t.co/lu9L8ywFiw pic.twitter.com/ABtrzCvpE0

Sir Branson revealed to CNBC Make It the importance of a strict daily routine that includes no shortage of exercise.

“I love to look after the body. If I feel great, I can achieve anything.”

“I play a very hard game of singles tennis every morning at 6, and I do the same again in the evening,” Branson continued.

“And I do 40 minutes of weight lifting, so that’s once a day…” he says. “I might go kite surfing when I’m living on the island.”

(Branson didn’t specify which island– Necker Island in the British Virgin Islands or Makepeace Island on Australia’s Gold Coast–both of which he owns.)

The Englishman, who drinks up to 20 cups of tea per day (white, no sugar), shared on his blog what he refers to as a “systematic fitness program” consisting of weights and band stretches, which aims to keep his weight down while increasing muscle and bone mass.

Branson isn’t immune to days when he wants to mail it in. His most important piece of advice is just to keep at it.

“The key for everybody is sticking with it — we all know that feeling of the high we get when we do an hour of exercise — I never want to stop getting that wonderful endorphin rush,” Branson wrote. “But it’s easy to slip into a ‘not today, I’ll do it tomorrow,’ mindset. You have to keep going even when you don’t feel like it.”

Dear Santa, for Xmas could I please be Richard Branson for the day? His life looks ace. That or a life sized model of Kelly Brooks knockers. pic.twitter.com/4j1HyHiryX