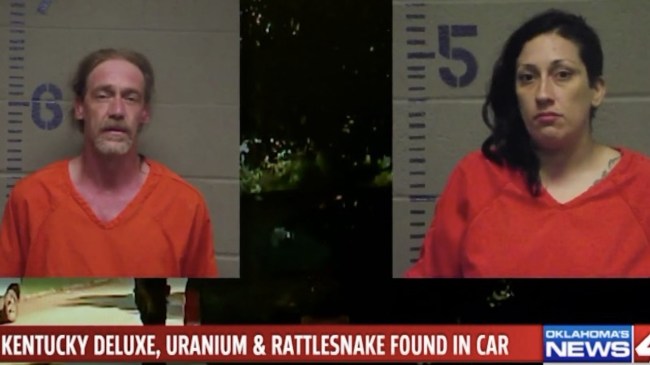 With the world being as apeshit insane as it is, it’s truly rare that a headline catches me off guard. I could read an article in The New York Times called “Headless Goat Stands On Two Legs And Karate Kicks The Pope” and not even bat an eyelash — our world has gone that off the rocker.

But this one, I must admit, genuinely surprised me. Usually, when a freewheeling midwestern couple in a stolen vehicle gets arrested, it’s because of traditional crimes such as weapons or drugs, not highly-volatile chemical elements and potently deadly reptiles.

According to a report from KFOR, two people — a man and a woman — were arrested earlier this week in Guthrie, Oklahoma, after they were pulled over in a stolen vehicle filled with a living, breathing rattlesnake, radioactive uranium, a handgun, and an open bottle of Kentucky Deluxe whiskey.

Perhaps most hilariously is that the car was only pulled over for expired tags. Only in America, right?

Speaking to reporters, Guthrie Police Sgt. Anthony Gibbs comically mused that “there’s quite a few unanswered questions” as the uranium is a total “wild card.”

Why yes, Police Sgt. Gibbs, I concur that the radioactive element you found in the backseat of this likely-crackhead couple’s car is quite out of the ordinary, indeed.

“So now he’s got a rattlesnake, a stolen vehicle, firearm, and somebody under arrest,” Sgt. Gibbs said to KFOR.

“When that happens of course, we call in a company that deals with that specifically and it`s taken safely into possession. The uranium is the wild card in that situation,” he continued.

Oddly enough, though, the couple has not been charged for the rattlesnake, because in the fine state of Oklahoma, they’re actually (kinda) legal!

“It happens to be rattlesnake season at the time, so he can be in possession of this rattlesnake because he has a valid lifetime hunting and fishing license,” Sgt. Gibbs said.

Uranium, a rattlesnake, and an open bottle of Kentucky Deluxe found after police pulled over a couple in a stolen vehicle in Guthrie. @kfor pic.twitter.com/6bh4MUuHcO