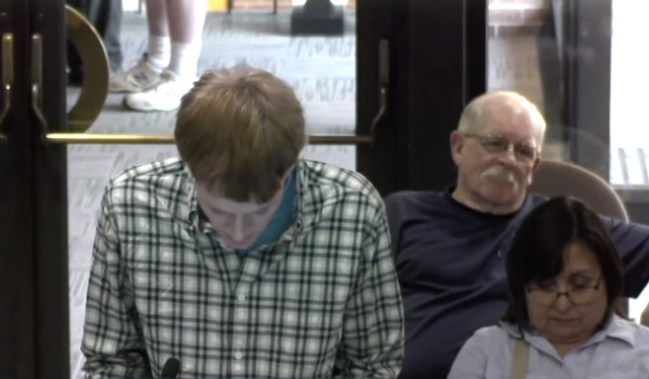 This clip of a spirited millennial fighting for democracy in Lawrence, Kansas will make you proud to be an American. He’s putting the system on blast, a system that pushes the morals of a few on the rest of us while laughing in the face of freedom.

The man in dad sneakers and high socks arrived to speak before the Lawrence, Kansas City Commission during a hearing regarding local Ordinance No. 9324 which pertains to the licensing of bodywork practitioners. Reading the name of that ordinance, I’d take it to mean tattoo artists or masseuses but I’d apparently be way off.

While you’re watching this riveting speech, be sure to watch the reactions of the elderly man sitting behind him as he delivers an impassioned plea to legalize handjobs by arguing that it’s better than a masseuse having to touch ugly people:

Where’s the applause at the end? Didn’t you get the sense that the room should’ve erupted into applause after that speech? I certainly did. Also, it took me like two full minutes to realize that woman sitting directly behind him wasn’t Roseanne Barr….But in all seriousness, do you think he lost a bet or do you believe this young libertarian is really into gatekeeping for HJs?

This is all eerily reminiscent of our dude Chad (Chad Goes Deep) who crashed a Los Angeles City Council meeting to fight for the rights of house parties. If you’ve never seen those clips, I highly recommend checking out the first and the second one because they’re better than you could imagine.