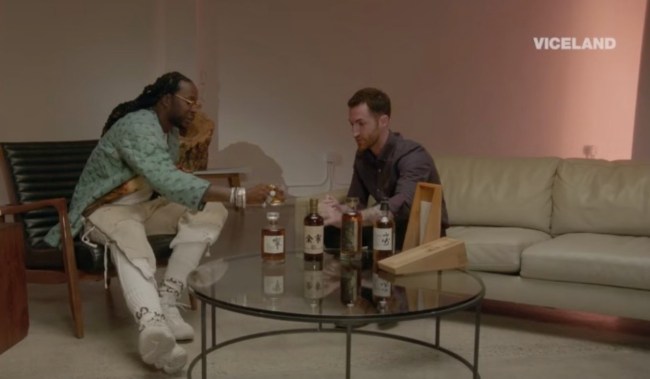 I’ve said this countless times here in the past on BroBible but I’ll mention it again today…It hurts to see someone else living out your dreams.

If you’re someone who has expensive taste, which I unfortunately am, then this is often the case with 2 Chainz who has the VICELAND show Most Expensivest where he gets to go around and sample the most expensive things on the planet ranging from the most expensive sex toys to designer cannabis and six-figure bongs, and other things like five-figure emergency survival kits and a $100K martini.

This extended clip from Most Expensivest really hits me in the gut and it’s probably the most jealous I’ve been of any 2 Chainz moments. Here he gets to sample a $10,000/bottle Japanese single malt whiskey.

I’ve been fortunate enough to sample at least one pretty high end Japanese whiskey, an 18-year-old Yamazaki single malt which sells for anywhere between $500 to $2,000 per bottle but that’s nothing compared to this nectar of the gods that 2 Chainz gets to taste. Also, I ordered my drink on accident by pointing on the menu to a cheaper drink and not realizing what I was drinking after the Brandy Library bartender had poured it until it was way too late and I was committed.

Here’s 2 Chainz in this extended clip from Most Expensivest sampling a $10,000/bottle Japanese single malt, one of the best whiskeys on the planet. My only real problem with this clip is that it isn’t longer.

One of the things that makes these whiskeys so expensive is the wood used to make the casks that they are aged in. The Japanese Mizunara Oak takes 200+ years to reach maturity before it can be used for whisky aging…That alone is insane.

The $10,000/bottle single malt that 2 Chainz taste here is a bottle of the Karuizawa 1982 single malt which interestingly has a score of around 90 out of 100 points from experts. One expert said it took a full year after opening this bottle of whiskey before it ‘opened’ and was fully ready to drink and that’s when this extremely rare spirit really began to show itself.

One reviewer claims the Karuizawa 1982 has tasting notes of caramel, spices, pear, chocolate, and on the nose you’ll get waves of vanilla, grapefruit, creme brulee, tangerine, clove, and more. It’s said to be incredibly complex.

For something even crazier, here’s a tasting of a 48-year-old Karuizawa (1964) that sells for around $47,000 per bottle if you can even find one to purchase.

I think it’s safe to say that life is pretty fucking good when you’re 2 Chainz. Not only does he get to sample the most expensive luxuries on the planet but he GETS PAID to do so. On top of that, he’s a multi-millionaire from his career in the music industry. This dude is truly living the dream.