3 Amateurs Took On 1 Pro MMA Heavyweight And It Ended Very, Very Badly For Them 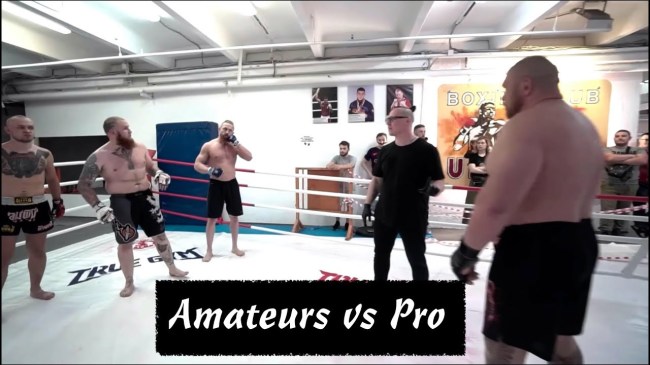 For some reason, there has been a lot more odd, “circus” mixed martial arts bouts of late. Of course, often these freak show fights are taking place in Russia where apparently anything goes when it comes to combat sports.

The last MMA circus fight we saw was Darina Madzyuk, a 139 pound woman, TKOing a 529 pound man in just 90 seconds.

Madzyuk managed to parlay that bizarre victory into a new contract with Bellator MMA here in the States.

According to Bloody Elbow, the four men doing battle include 47-year-old Maxim “Mad Max” Novoselov a professional heavyweight with a 11-2-1 record (the highlight of which is a victory over 17-21-1 Jimmy Ambriz) and three lightweight, uh, amateurs.

Something tells me that none of these fighters will be signing any contracts to fight here in America anytime soon based on their performance in the video from True Gym MMA.

Watch as Novoselov easily dispatches the three men, one with a nasty liver kick, another with an uppercut, (both of which took a combined 10 seconds) and finally, after slamming the last guy, chokes him out with an arm triangle, ending the battle royale in a brisk 48 seconds.

Also… what is up with the guy dressed like an armed ninja riot cop patrolling in the background?

Unfortunately, Novoselov can’t add this victory to his official fight record and his 9-fight winning streak which consists of fighters with a combined 18-37-1 record. (Ambriz is the only figher he’s defeated with more than one win on his record during that streak.)

That being said, this was highly entertaining.