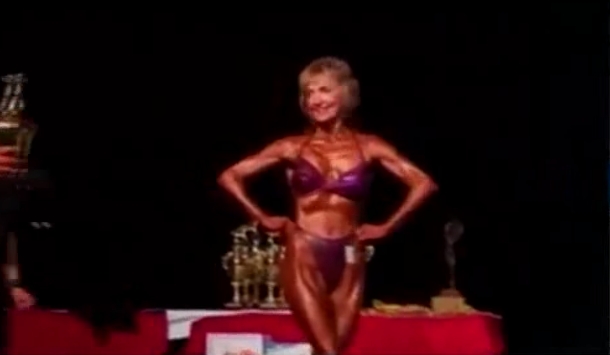 No knitting, puzzles or playing bridge for this grandmother. This 76-year-old grandma prefers pumping iron and competing in bodybuilding competitions. The toned grandma stole the show while appearing on Australia’s Got Talent.

76-year-old Janice Lorraine is a grandmother-of-three, a motivational speaker and bodybuilder. She began bodybuilding at the ripe ole age of 55 after she retired as a psychologist. She hasn’t looked back since. Janice has won 12 world bodybuilding titles despite getting a late start in the game. She recently won the 60+ Ms Universe title in Italy.

Janice Lorraine put the world on notice this week when she appeared on Australia’s Got Talent. Flaunting her impressive physique, she walked the stage of the talent show in a shiny purple bikini with the soundtrack of Donna Summer’s Hot Stuff blasting in the background.

Lorraine’s performance was impressive enough to lock down three “Yes” votes from judges Nicole Scherzinger, Shane Jacobson and Lucy Durack. Giving Lorraine enough votes to go to the next round of AGT.

RELATED: 61-Year-Old Grandma Of 6 Intimidates Men With Her Muscular 6-Pack And Buff Biceps

While judge Manu Feildel did not give her a “Yes” vote, he did say: “I can’t believe that your body is better than mine.”

“When I started in bodybuilding, there were hardly any females at all and all the guys wanted to get rid of me,” Lorraine said.

Lorraine recently competed in the iCompete Natural (ICN), which is a worldwide bodybuilding, physique; figure, fitness and bikini competition.

“This year, they had 450 women competing in the ICN,” Janice said. “That’s very exciting for me because women used to think once they hit a certain age they had to follow the stereotype and become old and frail.”

The grandmother trains six days a week and avoids the gym on Sundays to rest up.

Here is Janice at the spry age of 75 winning a bodybuilding competition.

But it wasn’t only Janice who put on a show of strength on Australia’s Got Talent this week. Meet Tulga from Mongolia, who swings two humans like it was nothing.

WOAH! 🔥🔥🔥 Tulga is one strong man and boy can he handle the heat!#GotTalentAU pic.twitter.com/hLwGs2K7mq