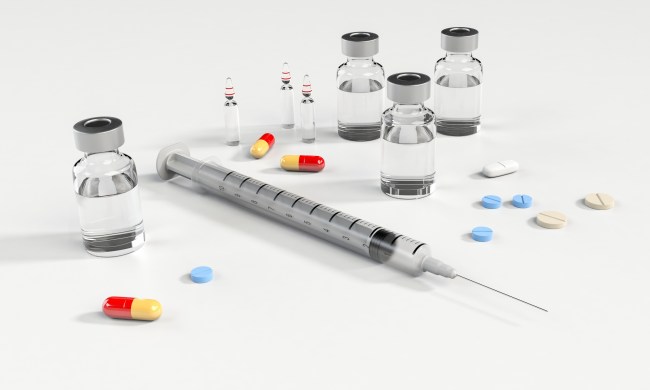 Addiction’s a serious problem, and we’ve all probably been impacted by someone who has had to go through it. Whether that’s substance abuse or something else, it’s never easy seeing a buddy or family member struggle to overcome it, incapable of just stopping on their own.

When it comes to addiction, though, there are probably a bunch of us who wonder what the most addictive substances actually are. I mean, anyone who went through D.A.R.E as a kid knows that “drugs are bad,” but do you actually know which ones are worse for you than others?

Thanks to researchers, we have the answer.

David Nutt, a professor at the University of Bristol, and some of his colleagues researched which substances seem to lead to the most addiction. That means they impact the brain’s dopamine system, which leave people with a pleasurable feeling that, when not fed, can cause withdrawals. Here’s what the results showed.

To be blunt, don’t f*ck with heroin, guys. According to Nutt and his colleagues’ research, the drug is the most addictive on the planet, with a score of three out of three on the system they were using.

In addition to the likelihood of addiction, heroin’s also dangerous AF, too, with the dose that cause death only about five times greater than the dose required to get high. Uh, no thanks.

Think you need a little pick-me-up to help keep you going all night long? Might want to avoid the booger sugar, dudes, because cocaine’s not doing any good for your body or brain.

Directly impacting your dopamine by sending abnormal signals to the brain’s reward pathways, coke is making you feel like you’re on cloud nine — but only for a short period of time till you need more. That’s why it can become such an addiction, with an estimated 21 percent of people who try cocaine becoming dependent on it at some point in their life, per Science Direct.

Whether you’re scratching your nicotine itch from tobacco or synthetic options like vape pens, you’re not doing any good to yourself. It’s believed that more than two-thirds of Americans who tried smoking reported becoming dependent during their life, per Science Direct, and, with smoking so common, it’s been estimated that tobacco will kill more than eight million people a year by 2030.

Found to be the fourth most addictive substance in the world by Nutt and his colleagues, barbiturates — which were drugs initially used to help with anxiety and help with sleep apnea — interfere with your brain’s signals, which lead to a feeling of euphoria. Problem is, when taken too frequently, these things can throw off your breathing, which can lead to death.

Easily the most commonly used substance on this list, alcohol addiction is a scary monster, guys — so be sure to drink responsibly.

Alcohol effects the brain in many ways, with experiments on animals showing that it increases dopamine levels in the reward system by 40 percent to as much as 360 percent — which is why you have all that liquid courage when you’re drunk. Alcohol’s also ranked as the most damaging drug, due to the variety of things it can cause people to do when judgement is impaired.