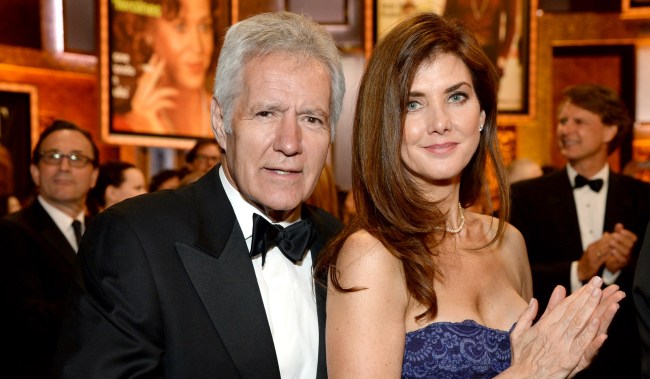 While many are still trying to wrap their heads around the fact that after 37 seasons, in 2021 there will be a new host of Jeopardy! as millions of people grew up with the sound of longtime host Alex Trebek’s voice on their television sets.

Unfortunately, after a nearly two-year battle with pancreatic cancer, America’s most popular game show host passed away at the age of 80 on Sunday.

Since then, tributes and well-wishes for his family have been rolling in by the thousands and have included many famous names as well as former Jeopardy! contestants.

Today we honor Alex Trebek. For over three decades he brought integrity, humor and intelligence to his duties as host of Jeopardy! He will be in our hearts forever.

Thank you, Alex. Love from us all. 💜 pic.twitter.com/w8abYY8SX5

Alex wasn’t just the best ever at what he did. He was also a lovely and deeply decent man, and I’m grateful for every minute I got to spend with him. pic.twitter.com/CdHCcbqmp2

Alex Trebek’s courage, grace and strength inspired millions and awed those of us who knew him. A tremendous loss for his family, friends, co-workers and countless viewers. I was honored to be a friend and a part of his professional family for all these years. A very sad day.

Alex Trebek was kind enough to film a cameo for our film Free Guy last year despite his battle. He was gracious and funny. In addition to being curious, stalwart, generous, reassuring and of course, Canadian. We love you, Alex. And always will.

😭😭 6p weeknights will never be the same. So many great memories and thankful to have met him ❤️ # https://t.co/W6TLqJy2Ug

I was obsessed with Jeopardy as a nerdy kid growing up in Ohio. I’ve loved and revered Alex Trebek since I can remember. What an iconic career. RIP Alex Trebek.

On Wednesday, Alex Trebek’s wife Jean broke her silence and posted a photo of the couple from their wedding in 1990 along with a heartfelt thank you message to all of his fans for their support.

“My family and I sincerely thank you all for your compassionate messages and generosity,” Jean captioned the photo. “Your expressions have truly touched our hearts. Thank you so very, very much.

Many Blessings to all, Jean Trebek”

My family and I sincerely thank you all for your compassionate messages and generosity. Your expressions have truly touched our hearts. Thank you so very, very much. Many Blessings to all, Jean Trebek

When she and the rest of Alex’s family found out that he had pancreatic cancer she wrote in an article for Guideposts that the news was, “A constant reminder of how precious life is.”

A good reminder for us all.