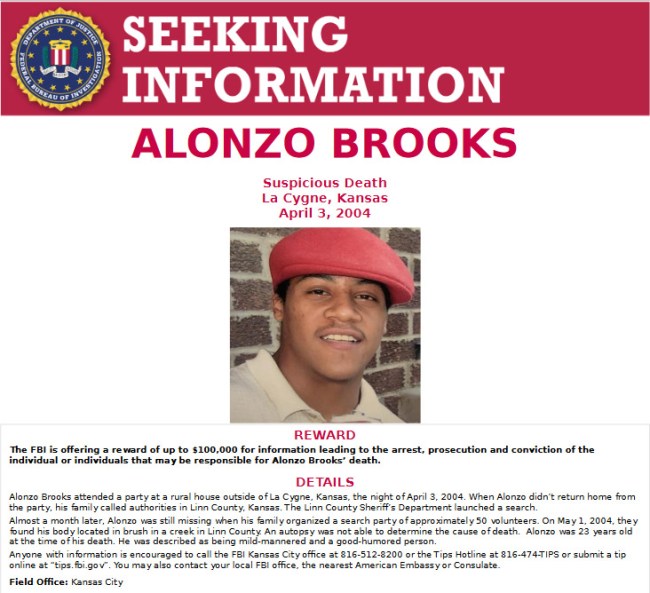 On May 1, 2004, the body of 23-year-old Alonzo Brooks’ was found in creekbed near La Cygne, Kansas several weeks after he was reported missing. Brooks’ cause of death, originally ruled “inconclusive,” is now getting new attention thanks to its being featured on Netflix’s rebooted Unsolved Mysteries program.

Brooks went missing following a party on April 3, 2004 when he was left alone there by his friends and forced to find his way home on his own the 50 miles back to Gardner, Kansas.

He never made it home, and while the Linn County Police Department, the Kansas Bureau of Investigation, and the FBI all conducted searches for Brooks, his body was not found until his family conducted a search of their own, locating his body on the very first day they looked.

The FBI and the U.S. Attorney recently announced a new $100,000 reward for information regarding Brooks’ disappearance and mysterious death.

"No Ride Home" and completely alone, a young Black man goes missing in rural Kansas. What happened to Alonzo Brooks the night of April 3, 2004? The FBI recently announced a $100k reward for information leading to an arrest and conviction of Alonzo's death. #unsolvedmysteries pic.twitter.com/FUMVn1Qt0Y

“We are investigating whether Alonzo was murdered,” said U.S. Attorney Stephen McAllister. “His death certainly was suspicious, and someone, likely multiple people, know(s) what happened that night in April 2004. It is past time for the truth to come out. The code of silence must be broken. Alonzo’s family deserves to know the truth, and it is time for justice to be served.”

McAllister added, “It defies reason to believe that Alonzo’s death was a suicide or that he somehow accidentally tumbled into a relatively shallow creek, in Linn County, leaving behind his boots and hat, all with no witnesses whatsoever.”

Tuesday morning, Brooks’ body was ordered to be exhumed from his grave by the FBI, which is now calling his death a hate crime as they have been pursuing new leads as a result of the case appearing on Unsolved Mysteries.

Update: The body of Alonzo Brooks was exhumed this morning. His case was recently reopened by the @FBI who are offering a $100K reward for tips leading to an arrest. If you know something please come forward. #unsolvedmysteries #Justiceforalonzobrooks https://t.co/5l38xxFr5r

“I can confirm the body was exhumed today as part of the Brooks investigation,” said Jim Cross, spokesman for the U.S. Attorney’s Office.

“Someone knows something and we are hopeful that with the passage of time and this significant reward this renewed effort will produce results and provide closure for the Brooks family,” said FBI Special Agent in Charge Timothy Langan.

Almost a month later, Alonzo was still missing when his family organized a search party of approximately 50 volunteers. On May 1, 2004, theyfound his body located in brush in a creek in Linn County. An autopsy was not able to determine the cause of death.Alonzo was 23 years oldat the time of his death. He was described as being mild-mannered and a good-humored person.

Anyone with information is encouraged to call the FBI Kansas City office at 816-512-8200 or the Tips Hotline at 816-474-TIPS or submit a tiponline at “tips.fbi.gov”. You may also contact your local FBI office, the nearest American Embassy or Consulate.

FBI Agent Leena Ramana told Dateline, “It’s been 16 years, but we hope that with this passage of time, someone who has information will come forward. Some of these kids, who are adults now, may have been scared to come forward before, or may not have known what they saw was important. But any piece of information is significant and could be the missing puzzle piece we need to solve this case.”

The FBI also reports they have received at least 20 other tips related to the other cases featured in the show. Over 260 mysteries from the show’s original run were solved thanks to tips and other related factors.