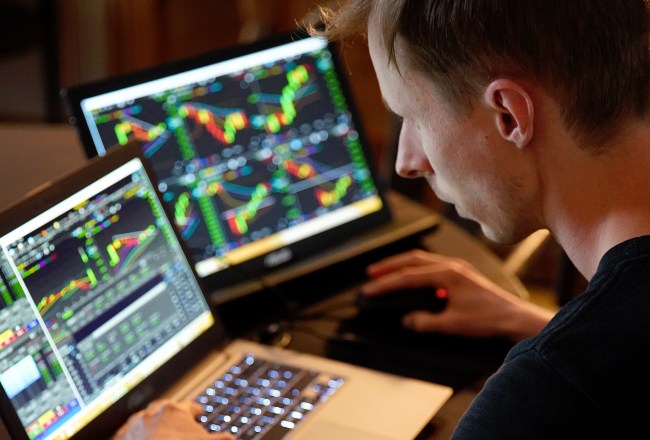 When I was in college, I had a roommate who (based on a quick WebMD search) either had borderline personality disorder or a cancerous brain tumor based on his tendency to get way too invested in one particular interest for a few weeks before deciding he was over it and starting the cycle anew by finding something else to get overly obsessed with.

Unfortunately, most of the activities that became the target of his hyperfocus tended to be pretty self-destructive in nature, like his one phase where he became obsessed with getting ripped and started a regular regimen of steroids sourced from the dark web, a resource he continued to harness when he found his next fixation in the form of doing a shitload of cocaine.

There was also a stretch where he got literally invested in a new venture after convincing himself taking three semesters’ worth of finance classes had provided him with all of the knowledge and insight he needed to find success as a day trader. This kicked off a period of time where he would spend hours a day analyzing charts on a giant monitor that magically appeared on his desk, a purchase that seemed like less of a necessity and more of an attempt to gain some sort of legitimacy.

Sadly, it only took a couple of weeks to find a new hobby thanks to a bet on oil futures that wiped out his entire bank account.

If you’re familiar with the subreddit filled with testimonials about the soaring highs and potentially life-ruining lows of day trading, you’re more than aware that it’s not an activity for the faint of heart. Hell, simply reading success stories can be risky, as these aspirational tales can delude you into thinking you have just as much of a shot at doing the same (not to mention most investors who get absolutely annihilated aren’t too inclined to share their failures with the world).

Betting on the stock market may give you more control over your fate than throwing a stack of chips on black at a roulette table, but at the end of the day, you’re still gambling—which may be part of the reason day trading has become all the rage since the world all but lost the ability to wager on sports a few months back.

Three million new users got in on the action on Robinhood between the start of the year and the end of March and there’s little doubt it’s been flooded with more accounts since then. Obviously, not everyone who’s signing up is doing so in order to potentially put their life savings on the line but a fair amount of anecdotal evidence has emerged to suggest the platform is home to plenty of aggressive investors with rookie status. Many of them have experienced success and have been more than happy to brag about it, but based on what some analysts are saying, there may be a deluge of horror stories coming courtesy of the very folks who’ve been flooding the market in recent months.

According to CNBC, plenty of people on Wall Street—you know, the ones who went to school in order to earn a degree in finance and embark on a career that pays them handily for their insight—have expressed concern that amateur traders have created a bubble that’s just begging to burst based on the general trends observed on Robinhood in recent months.

While the market may be trending upward, most of the world’s biggest investment firms are still taking a bearish stance and have been since the Dow got obliterated back in February. This is a notably different approach than the one amateur speculators have taken since then, as they’re scooping up stocks and faring pretty damn well, sporting an average return since things bottomed out that’s 16% higher than what Goldman Sachs has managed to achieve.

However, many pros say the current trend is about as sustainable as a relationship with an Instagram model who refuses to post any pictures of the two of you together thanks to the instability of the investments responsible for the rally. A huge chunk of people have been gravitating toward notoriously volatile penny stocks and banking on companies that have recently filed for bankruptcy to bounce back. Thanks to the sheer amount of volume generated by bulls, prices have gone up but so has the overall risk that comes with holding potentially inflated investments that stand the risk of befalling the same fate as Pets.com.

It’s worth noting Barclays doesn’t buy into this particular narrative, so if firms can’t even come to a consensus, I’m not even going to try to speculate on how all of this speculation will eventually play out but some people may want to strap in for what could turn out to be a wild ride.