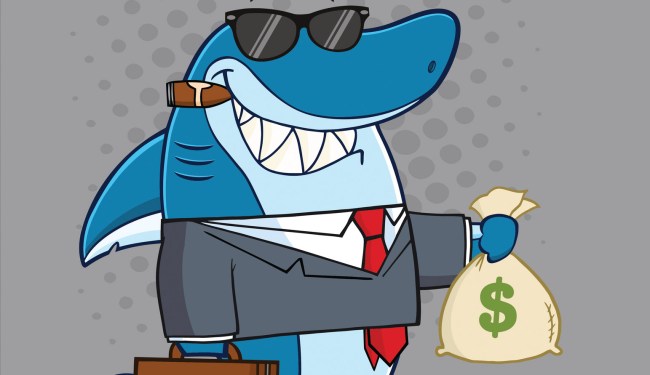 Apparently not everyone can make a comfortable living by posting just a few pictures to Instagram. Go figure. And we know that millenials blame their crappy credit scores for holding them back in life.

And since it is Shark Week after all, the folks over at MyBankTracker polled their readers to find out how far they’d go to get out of debt and one of the options that would appeal to way more people than it should involved swimming in a pool of sharks.

Here’s some of what they discovered.

Respondents were asked to choose between one of four extreme scenarios and the lengths people would go to are pretty astounding with some folks even saying they’d trade intimacy for an entire year in exchange for freedom from debt.

45 percent of the people polled said they could go a whole year without any physical affection from their significant other if it meant getting out of debt. And here’s a shocker, women said it would be easier to do without it than men (58 percent to 42 percent).

21 percent of the survey respondents said having no human contact at all for a year would be worth it to get out of debt. This time, however, it was men who were more willing to sacrifice than women.

18-to-24-year-olds ranked highest for this option in terms of age, with 26 percent of them choosing this scenario over the others included in the survey.

19 percent of those pooled said they’d be willing to swim in a pool of sharks for 30 minutes in order to get rid of their debt.

Again 18-to-24-year-olds were the most willing to go to extremes to lose their debt (25 percent), but this time they were tied with 25-to-34-year-olds, who also came in with a rate of 25 percent of them willing to give the sharks a go.

Some people (15 percent) said they’d even be willing to walk naked in Times Square once a day for an entire year to get out of debt. In this scendario, men (20 percent) were more willing to take the walk than the ladies were (10 percent).

So what should you really do to get out of debt? According to MyBankTracker, you need a plan.

Here are some tips they recommend…

1. Make your debt less expensive – Transfer your credit card balances to a card with a lower rate or consider refinancing your student loans to another lender.

3. Strip down your budget – If you don’t have a budget, that might be part of the reason why you’re in debt, so make one. Then get rid of any expenses that aren’t essential and use that extra money towards your debt repayment.

4. Consider tapping your assets – If you have an emergency fund set aside, such as a savings account or a certificate of deposit, use it to get rid of your credit card debt or student loans.

View the entire study and learn more about their debt-reducing suggestions here.