America’s Top Guilty Pleasures Have Been Revealed And We’re All About TV, Food, And Being Lazy 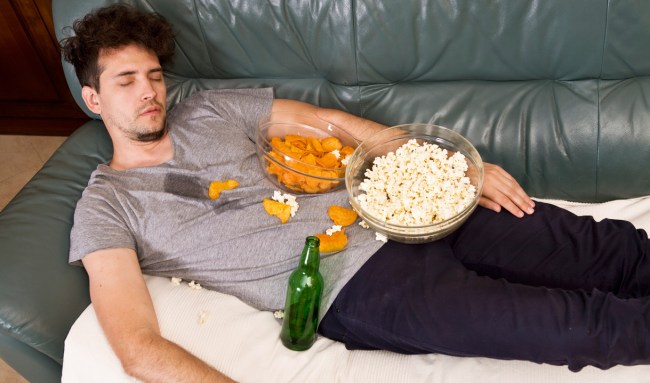 Putting off a task, singing your heart out in the car and binge-watching a whole TV series in one sitting also number among America’s top 30 guilty pleasures.

The list emerged in a study by Vudu.com, which explored the nation’s leisure time habits and found that 84 percent of the country has at least one guilty pleasure they indulge in from time to time.

From eating an entire bag of chips in one day to drinking juice or milk straight from the carton, the list unveiled a number of acts we partake in that we don’t necessarily want to be public knowledge.

The new study of 2,000 people revealed one in four Americans (24 percent) love to slink back into bed on a lazy Sunday afternoon and, speaking of beds, another one in four (23 percent) find bliss eating a meal there.

For one in ten Americans (11 percent) that means checking in on the latest celebrity gossip, while 17 percent might take in a daytime soap opera.

With three out of the top 10 guilty pleasures being related to TV, the survey really spelled out America’s love affair with TV and movies.

Romantic comedies were voted on as the guiltiest pleasure movie genre (21 percent), with comedy (11 percent) and teen romance (11 percent) rounding out the top three.

A spokesperson for Vudu said, “The results showed that guilty pleasures come in many forms. Whether it’s eating that extra scoop of ice cream or watching a cheesy rom-com, indulging in one can be one of life’s purest joys. Whether it’s watching an episode of The Bachelor or another viewing of The Notebook, you’re bound to find it on Vudu.”

While having a guilty pleasure is certainly not uncommon among Americans, that doesn’t mean they’re always perfectly secure with them.

In fact, 38 percent of Americans confess they’re at least a little ashamed of their guilty pleasures, with 39 percent admitting to lying about them and 22 percent actually hiding one from their partner.

According to the survey, one respondent has a coin collection they hide from their partner, while another has a love affair with chocolate they’d like to keep a secret from their significant other.

But harmless guilty pleasures, such as reality TV and Disney movies, are nothing to be ashamed of, so sit back, throw on the latest episode of The Bachelor, and enjoy.