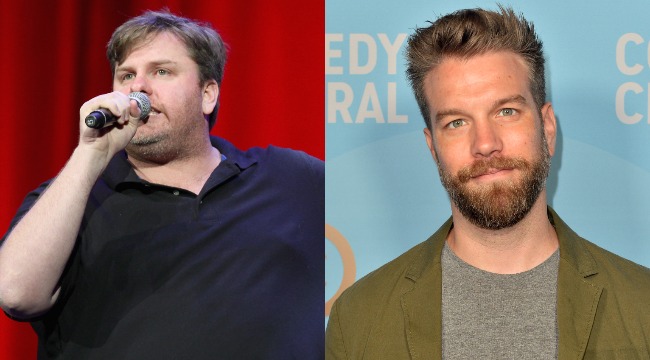 Comedians Anthony Jeselnik and Tim Dillon engaged in a bit of an industry dust-up over the past week and I can’t help but take stock of the bizarre ways in which beefs are unraveling nowadays.

Very much gone are the days of roughing each other up outside a cash only bar and having a beer and shot to bury the hatchet.

This is how things play out today.

In February, Jeselnik the article above to his 1.2 million Twitter followers, tacitly acknowledging pervasive hateful ideology within the comedy industry.

The author of the piece primarily takes aim at Gavin McInnes, who he claims used his Gavin McInnes Show to not only introduce the comedy world to the Nazi world but to “let one legitimize the other.”

Armed with this information, Dillon, who now lives in Austin, returned to Los Angeles for two weeks to perform stand-up spots and was often put on the same bill as Jeselnik.

“We must’ve talked for 3 minutes total over the two weeks we were in [the green room] and it couldn’t have been more banal,” Jeselnik said on his podcast.

During a recent The Tim Dillon Show episode last week, the comedian unloaded on Jeselnik for accusing comedy of a having a morality problem when he “made his bones doing Boston Marathon bombing jokes.”

“Doing spots is something I’ve done for 12 years. It’s not as fun anymore. It’s not as fun anymore to have to make small talk with Anthony Jeselnik, who shared an article saying comedy had an Alt-right problem that the New Republic decided to publish. Anthony Jeselnik, who made his bones doing Boston Marathon bombing jokes, has now decided that he’s the arbiter of what is and isn’t appropriate to be said on stage. And I have to go speak to him like he’s an actual human being.”

He’s a great joke writer, the comedy is not really for me…But that’s what spots are. I have to sit in a green room and talk to him even though I know he shared an article that seeks to take everyone I know’s career away.”

In response, Jeselnik said on his podcast:

“People are like, ‘Are you mad?’ There’s no beef. Maybe this causes beef: I am flattered. I am flattered that someone would not like me, be nice to my face all week, and wait until they left the city to record a podcast talking about how awful it is to make small talk with.”

PHASE 4: ADMIT TO ONLY HALF-READING THE ARTICLE AND POSTING IT TO POSTURE TO MILLIONS OF SOCIAL MEDIA FOLLOWERS WHO WON’T READ PAST THE HEADLINE EITHER.

“I regret tweeting this article out so much that I almost want to do it again just to punish myself for doing it,” Jeselnik said.. “I didn’t re-read the article. I didn’t educate myself on the people in the article and I just started talking out of my ass.”

PHASE 5: RIP THE AUDIO OFF YOUTUBE, POST IT IN A BLOG, AND PACKAGE IT AS ‘NEWS’ SO YOU CAN TELL YOUR DAD YOU’RE A JOURNALIST.

PHASE 6: SCHEDULE A BOXING MATCH UNDER A LOGAN PAUL UNDERCARD AND BROADCAST IT ON PEACOCK +

TBD. Will keep you posted.