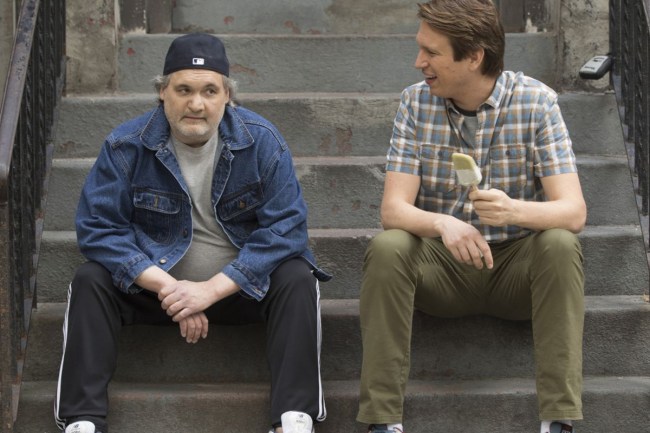 Pete Holmes talks about how Artie Lange‘s addiction caused the comedian so much pain and how it affected his role on the HBO series Crashing.

The HBO comedy series Crashing debuted on February 19, 2017, showing the difficulties of life on the road that comedians face. Originally, Artie Lange was cast as a fictitious and “totally different character” that “just had two lines” in the entire episode the comedian told the Village Voice in 2017. In late 2015, Artie auditioned in front of fellow comedian and Crashing creator Pete Holmes and filmmaker Judd Apatow.

Artie knew that Judd appreciated actors who improvised, so he did just that. “So I just kind of got an outline in my head of what they wanted to do,” Artie said. “Then the greatest thing in the world happened that gave me a leg up on the competition.”

Artie Lange was cast as Artie Lange and would be a recurring character in Crashing. Holmes and Apatow loved Artie’s improvisation so much that they named the pilot “Artie Lange.” But by the end of Crashing there would be a much different feeling about Artie.

Pete Holmes recently appeared on The Last Laugh podcast and discussed what it was like to work with the roller coaster that is Artie Lange.

“To know Artie is to be concerned about him,” Holmes told the podcast’s host Matt Wilstein. “And I say that with love. I would say that if he were here.”

The former Howard Stern Show sidekick would appear in 11 of the show’s 24 episodes until the series was canceled by HBO and the final episode aired on March 10, 2019. Holmes remembers how Artie was not well by the end of Crashing.

Holmes said filming the last scene of the series finale with Lange at New York City’s iconic Comedy Cellar was “a little bit sad.” Holmes said that “Artie was sort of coming undone by that point.”

RELATED: Artie Lange Is Out Of Jail And ‘Doing Really Well’ While Serving Community Service As A Garbage Man

“It’s not to say that he’s leaving Artie, but there’s sort of this hint of like, well now maybe he’ll go this direction,” Holmes says of his Crashing character. “So that sort of broke my heart a little bit to see that image. That was heavy for me.”

Holmes said that there have been discussions of a Crashing movie. “And I was like, I don’t know what the movie would be,” Holmes says, “but if there’s one thing that would be interesting to me it would be that story for Artie.”

Holmes said that Artie “wants to get well” and he believes that after seeing what Lange went through that addiction is a “straight-up disease.”

“I think he’s clean now, he’s been in rehab,” Holmes said of Lange. Sadly, on Tuesday, Lange was arrested by the Essex County Sheriff’s Office in New Jersey for violating his probation during his drug court program.

Lange, Holmes and Apatow demonstrated their chemistry they had together when they were promoting Crashing on the Jim and Sam Show in 2017.