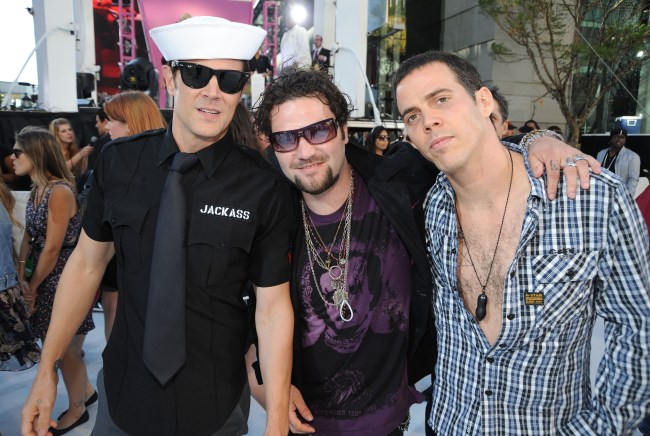 Bam Margera put Knoxville and the Jackass 4 gang in an impossible spot with his volatility and failure to live up to his contractual commitments, but it’s reasonable to empathize for the guy.

He was a central figure in the franchise’s success, admitted a fourth installment is “all I’ve been wanting to do for 10 years,” and will now be excluded from the first Jackass movie following the death of Ryan Dunn way back in 2011.

You make your own bed and all that jazz, but it’s easy to imagine this very public nixing is a waking nightmare for a guy who may not be stable enough to absorb it.

TMZ tracked down the 41-year-old to see where his headspace was at a month-and-a-half after being permanently fired from Jackass 4 after going “AWOL from the production” despite being monitored by a wellness coach on set.

“Basically, it started off with…‘Bam, you’ve been out there on TMZ being a jackass and you’re almost like a liability,’” said the 41-year-old Margera. “I’m like, ‘Wait a minute, you’re telling me I’m too jackass for Jackass?’ … I went to rehab for Adderall and alcohol, and I went there thinking I was going to do 30 days but they insisted that I do 90 days. And I’m like, ‘All right, is this on my bill or yours?’ Well, it’s on mine.” [transcribed by Complex]

It was reported in February that the rehab center in Florida cost him $90,000, a solid investment considering the $5 million payday he’d historically received for his involvement in the three other Jackass movies.

Margera then rattled off the 18 prescription drugs he came out of rehab with incredible precision:

He then claimed to still be on Adderall and Klonopin because of his ADHD, which Johnny Knoxville had a massive problem with.

“This is what the doctors say I need,” Bam continued. “Then it led to suicidal tendencies on all 18 medications that I was on, I’m like, ‘Well what’s the point of a 5 million dollar contract if you have to walk on eggshells and jump through your hoops, which is already impossible.’ … What the fuck is the point of having the money if I’m not here anymore, because I was gonna die of a pill overdose or suicidal thoughts?”

When asked if he blames the production crew, he added, “It was the definition of fucking torture. They tortured me.”

Margera’s torture claim comes in the wake of a February social media video (now deleted) in which he claimed: “Jackass has put me through f*cking hell on f*cking wheels for the past year and a half.”